Villa Woes: turning your rundown villa into a wow home

Would you describe your villa as charming but missing something? Many villas are just a diamond in the rough waiting to be brought back to life. Get inspired here...

By Joanna Jefferies
If you’re looking at transforming a villa from derelict to dynamite, then chances are you might be feeling overwhelmed at the task ahead. Because unlike younger homes, villas have been around for more than a Century and in that time they’ve typically undergone renovations, been patched up or settled at wonky angles. But it’s simply a matter of checking off a few key upgrades to the existing structure before you can transform that ugly duckling into a veritable swan. We’ve compiled a list of key changes you can make to get that WOW factor.

Before embarking on cosmetic renovations there are several improvements you’ll need to make. Firstly you’ll need to inspect the roof, gutterings and flashings above windows and replace or re-instate as necessary. Flashings have often been removed from windows and this can cause water to track in and behind joinery.
Once you’re water-tight you’ll want to look at the piles under the house. These may need shoring up or replacing completely depending on how uneven the floor is. This should always be done before any interior work as moving the piles can cause interior wall linings to shift and crack and you don’t want to have to do those twice! This is also a good time to insulate if there isn’t any insulation in place.
Next, you’ll need to inspect the weatherboards and windows and have any rotten boards replaced, and any windows fixed or re-puttied. You’ll also want to have your chimneys inspected.
Then, lastly, you’ll need to get wiring and plumbing examined by a professional. If you need to upgrade, it’s a good chance to decide if you want to make layout changes and to add in some extra power points. It’s also an opportunity to future-proof and install add-ons like surround sound or automation.

Now to add the WOW

By nature, villas can cope with a good dose of drama says Refresh Auckland Central’s Dave Georgetti “There’s a lot of stuff you can get away with that would be too much in a new build,” he says. But don’t feel tied to the era of the home, says Dave, because modern and old can look great together - just “don’t muck with the traditional layout.”
In a villa, this layout typically looks like a wide central hallway with rooms coming off of it. Upgrades usually involve an extension at the rear that can either be modern or ‘in-keeping’ with the villa.
To increase street appeal, Dave says you can add a lot of detail by installing new fretwork, corbels, finials and other flourishes that will make your villa seem much grander than it might ever have been.

Similar flourishes can increase the drama inside the house too. Dramatic colours or textured wallpaper on walls and detailed skirting and architraves are a start, but you can also add in ceiling roses, tongue and groove panelling, wainscoting, dado rails and pressed tin ceilings. Just “try to keep us much character as you can in a villa,” says Dave.
If you need to replace wall linings it’s also a great opportunity to insulate.

Villas are typically very dark as they were oriented toward the street and not to capture the sun. This means creating more light in the villa is key to making it really ‘pop’. Installing more lights, internal windows and skylights or solar tubes are all ways of increasing light in dark rooms. “Anywhere that you can create flooded light, through a stained glass window or skylight it’s going to make a difference,” says Refresh Wellington’s Chris Bath.
While chandeliers are in keeping with the villa period and create a sense of grandeur, you don’t have to feel tied to them – there’s a wealth of pendant lighting with ‘wow’ factor and almost anything will look good, as long as the light is proportionate to the space it hangs in.

“You can definitely put contemporary kitchens and bathrooms in an old villa,” says Dave. Making these look impressive is the same for any other renovation: stone benches and a feature tile on the walls are excellent ways to create drama “Stone benchtops are timeless and if you’re trying to be period accurate, people are using bevelled tiles on splashbacks.”

One of the outstanding features of villas are the wide native timber floors. Where possible have these patched and polished for maximum impact. Dave says he often stains these dark for added drama.
If you want to add further luxe, a lot of that will come down to your interior choices -  drapes, floor treatments and colours.
“I always think linen or velvet looks luxe and creates a sense of drama. There’s a lot of stuff you can get away with that would be too much in a new build,” says Dave. “Hang your curtain rails really high – halfway between the top of a window and ceiling.” This will help create the sense of grandeur you’re after.

If you’re doing an extension, make sure the new flooring matches the old. You’ll also want to make sure the skirting and cove matches. “The attention to detail in any reno, but particularly with a villa, is what really what gives it a wow factor.”
Ceiling height is also a key detail to consider. Villa ceilings are usually not less than 3m – “If you reduce it down to 2.4, you lose a lot of the feel of the place. Keeping the high stud would be an important factor in getting that wow,” says Chris.
When you’re on a budget, it’s important to also weigh up what’s going to be there long term and what can be easily changed down the track, explained Chris. For example, he would invest more in flooring rather than a kitchen that can be upgraded later on.

Interested in bringing out your villas potential? Get in touch with a Refresh Renovations specialist to arrange a free consultation. 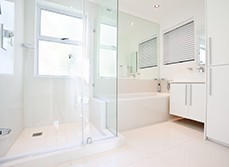 FAQs for a bathroom renovation 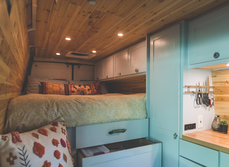 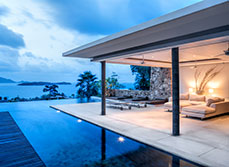 How to make your home Airbnb worthy