This renovation used the term “flipping” quite literally, swapping the ground floor and first-floor layouts to make more sense for the family of four. 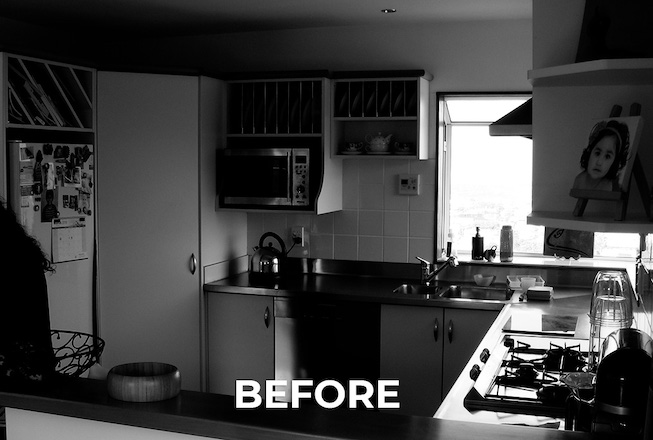 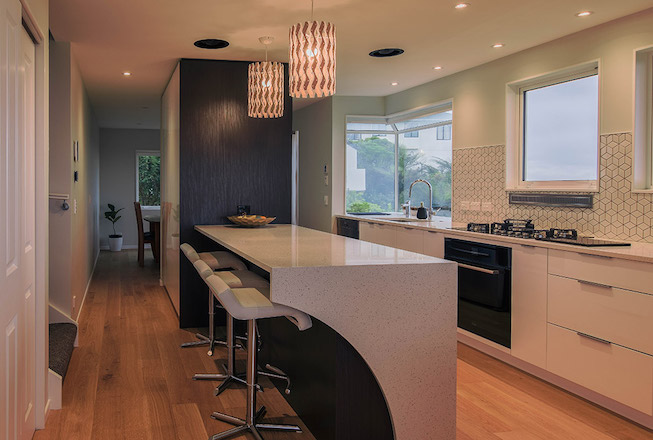 While clean lines and simpler design were notable architectural trends in the late twentieth century, for Brooklyn homeowner Suman, his modern home felt completely devoid of character. Except for one feature: the kitchen and living areas were upstairs and all bedrooms were at ground level. Frustrated with the odd layout and tired design, Suman reached out to Refresh Renovations and was connected with Renovation Consultant Nick Leko.
Suman explained that in addition to fixing the unusual floor plan, he also wanted to add an extension and an outdoor courtyard. With a clear idea of Suman’s vision, Nick was keen to get started. Having renovated many older homes in Wellington, Nick knew that working on Suman’s relatively new build would be a very different project.

Even though Suman brought a healthy budget to the table — $600,000 —  costs had to be meticulously managed. Suman’s budget was realistic for the work he wanted done, so that made it easier to move between the concept and costing stages. After creating and discussing the concept design, Nick provided Suman with an estimate for the project. Slight adjustments were needed but everything Suman wanted to achieve was included.
Creating the open floor plan meant most of the interior walls had to be removed, which in turn necessitated a full structural redesign and council consent. As the project manager, liaising with the council was all part of Nick’s job. With the necessary approvals and with the new bracing plans in place, the team could get started.

Suman’s home has monolithic cladding which, if cracked or damaged, can lead to a leaky home scenario. Nick’s team therefore had to be extremely careful not to disturb the cladding or framing, even when working on the interior. Their vigilance ensured they weren’t predisposing the cladding to any moisture breaches in the future.
With council approval in hand, the team gutted the interior on both floors, upending the previous layout by re-establishing the bedrooms upstairs and leaving the ground floor as the dedicated living level. A newly-built extension gives Suman and his family the additional downstairs space he and Nick had discussed.
A skilled team of tradies, including plasterers, heating and waterproofing specialists, masons, and plumbers, worked on the renovation. Nick’s interior designer even took care of the painting and decorating. But transformation went well beyond the interior; outside, the team built a courtyard and undertook all of the property’s landscaping too. 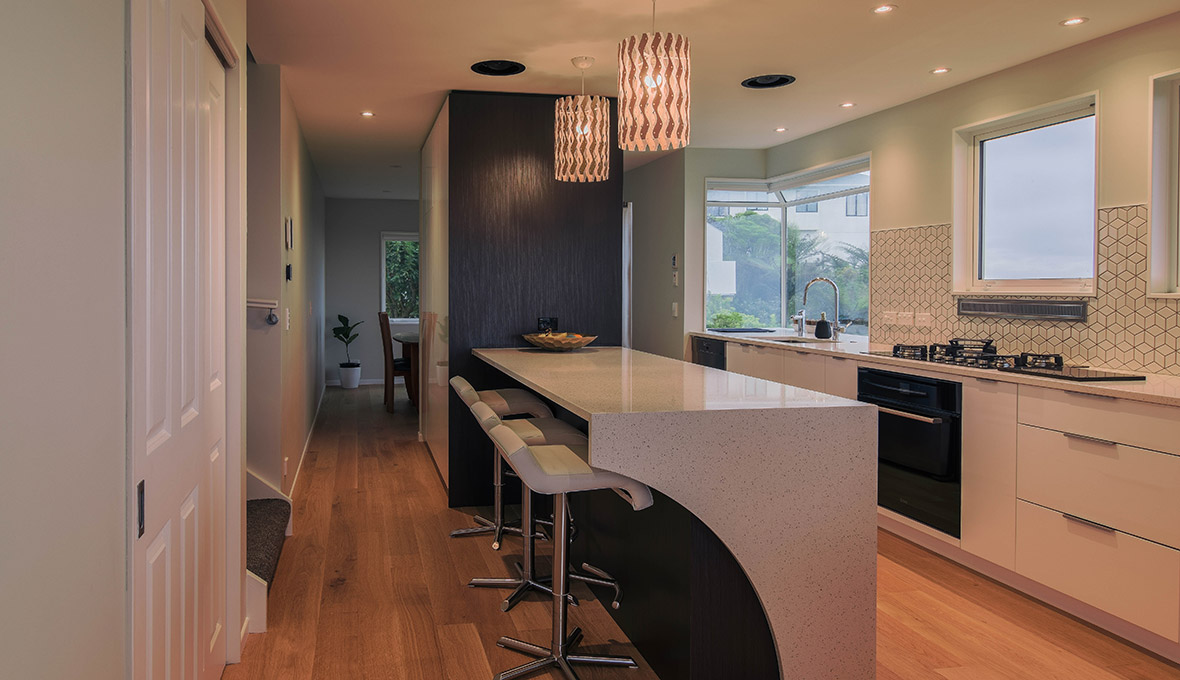 The kitchen and dining area are now combined in an oblong shape that makes best use of the space. The east-facing windows get beautiful morning light and provide captivating views over Brooklyn and Mount Cook. On one of Wellington’s ‘good days’, Mount Victoria can also be seen. An informal dining area at the end of the open plan kitchen has just enough separation to make it feel cosy, but not secluded from the rest of the living spaces.
The new bathrooms are much better suited for family living. Suman and his wife now enjoy a luxurious ensuite complete with a rainfall shower and built-in soaker tub. Elsewhere, a separate bathroom and powder room with stylish finishings are available for the younger members of the household and guests.

The generous use of patterns and textures throughout the interior make for interesting features at every turn — bold wallpaper in the master bedroom and hallway, floor-to-ceiling slate and concrete-look tiles in the bathrooms, and a chic geometric splashback in the kitchen.
Warm timber used throughout the home contrasts nicely with the elements of stone and modern chrome. Artistic touches, such as the asymmetrically placed basin on a floating slab vanity and the architectural kitchen island are on theme with the eye-catching interior design.

The transformed interior completely changes the way this home functions while giving it the character it was lacking. Suman’s children are loving the new living spaces and enjoying their upstairs bedrooms. It is exactly what Suman wanted to achieve – a home that worked better for his family. 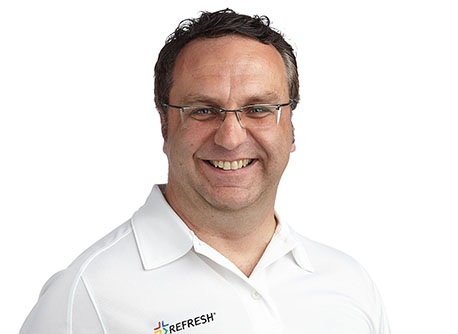 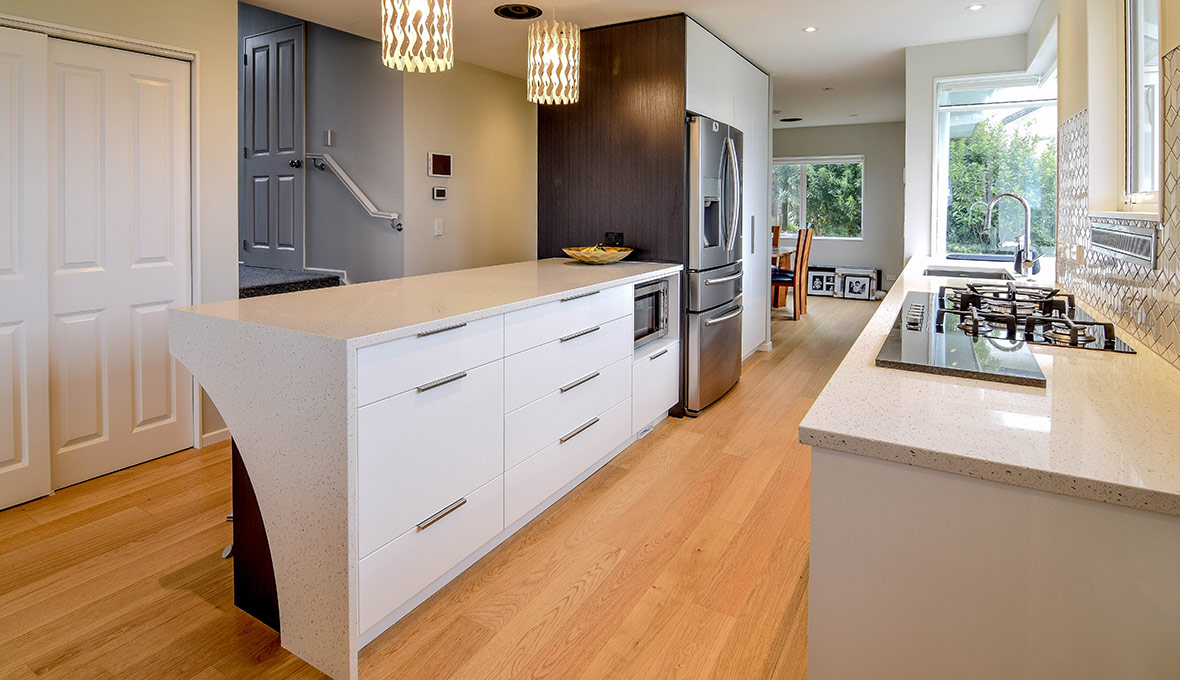 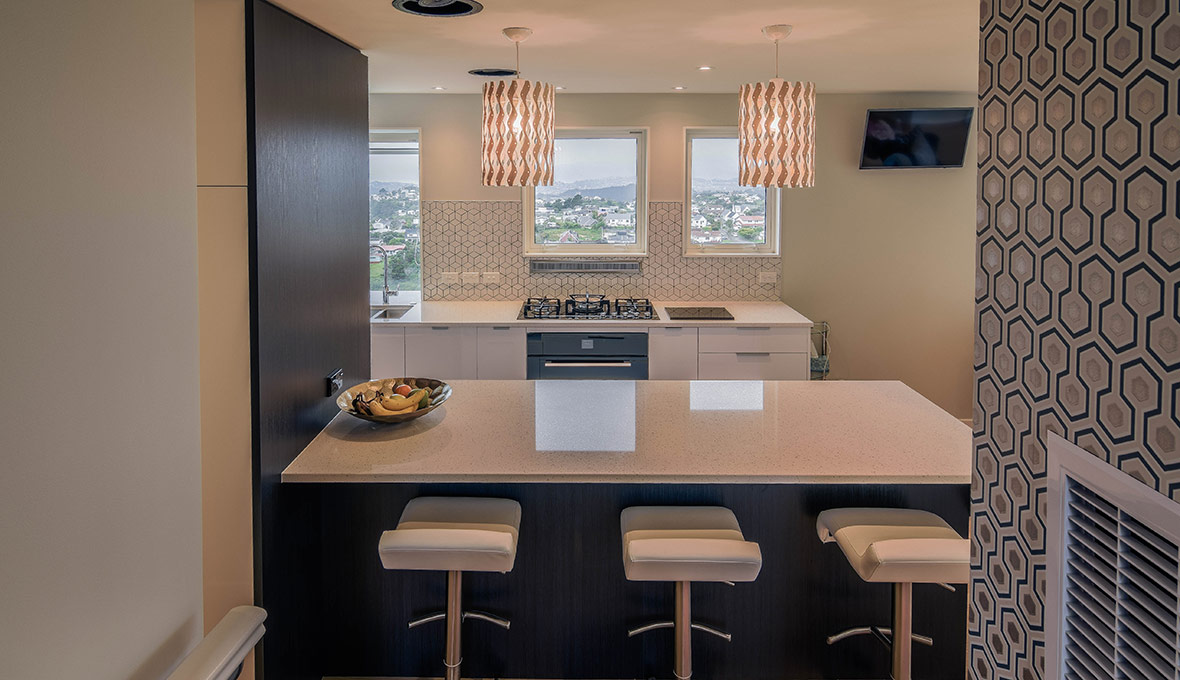 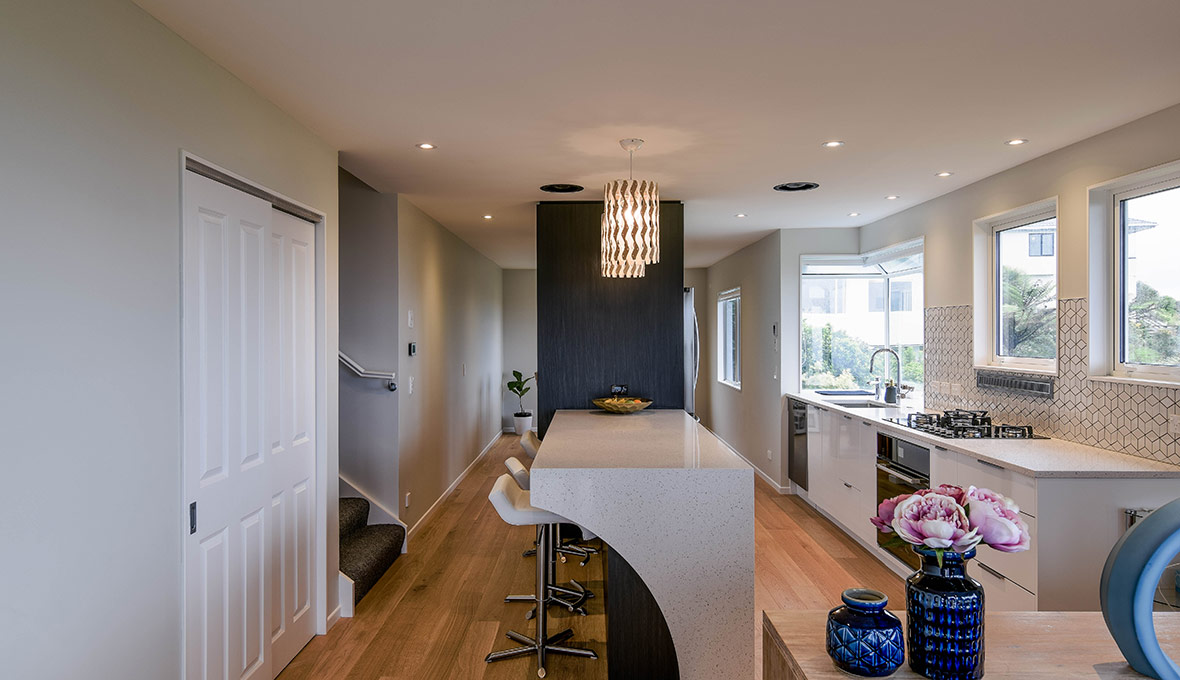 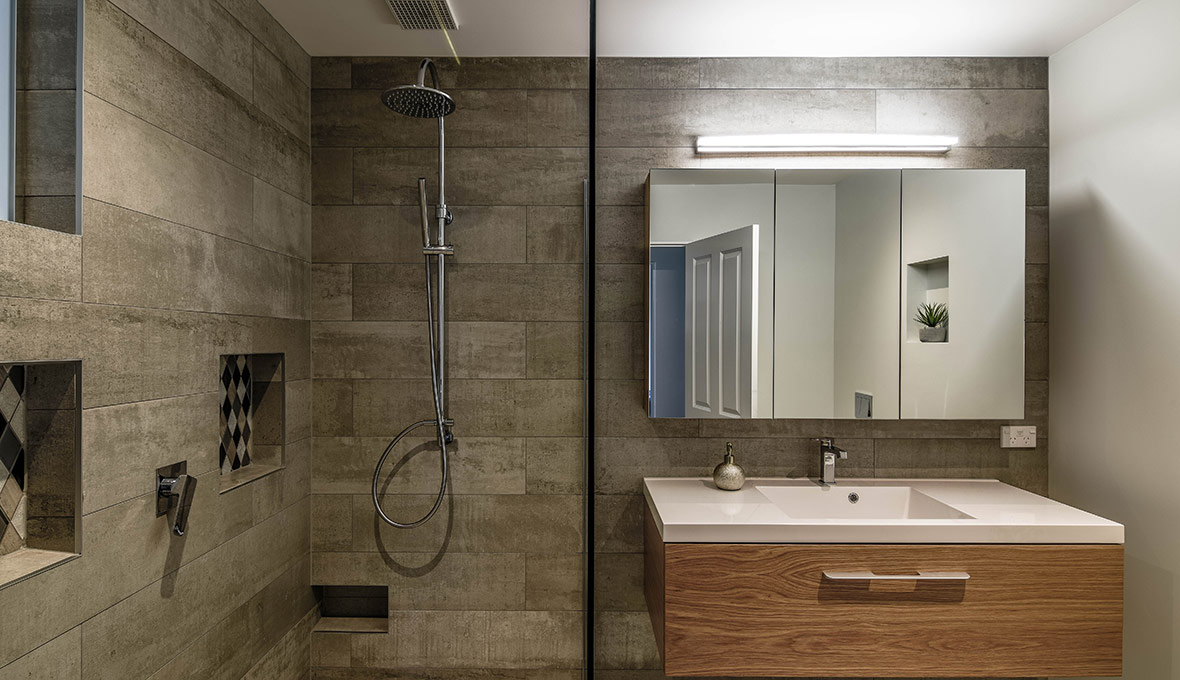 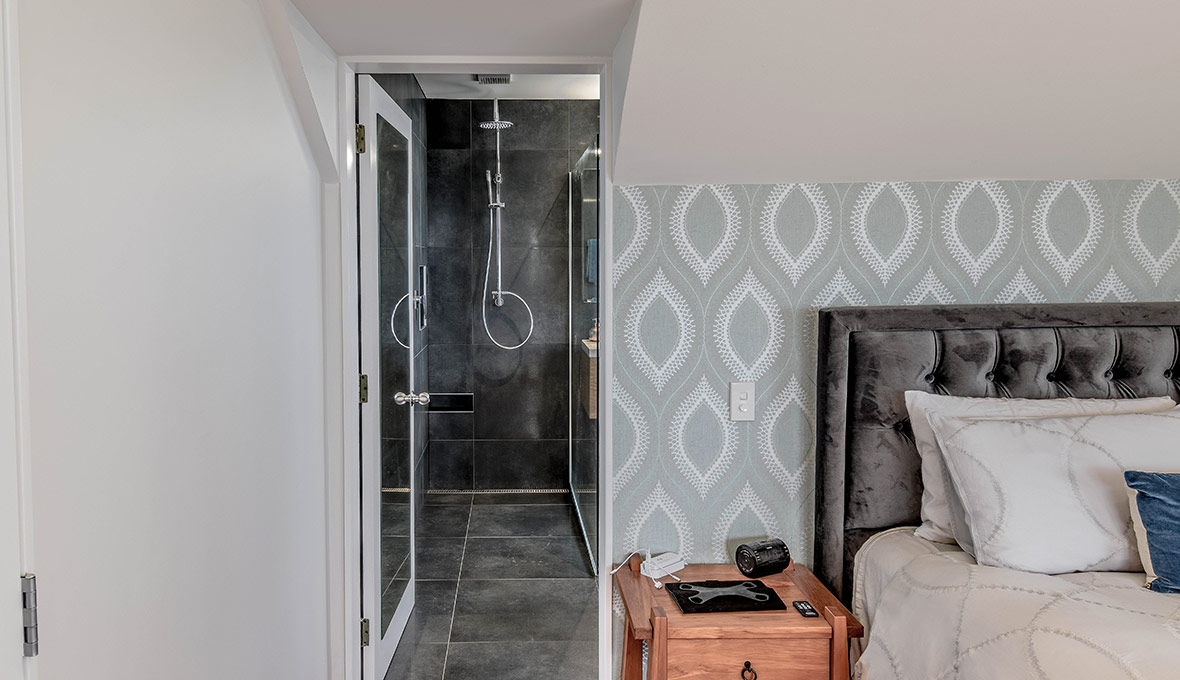 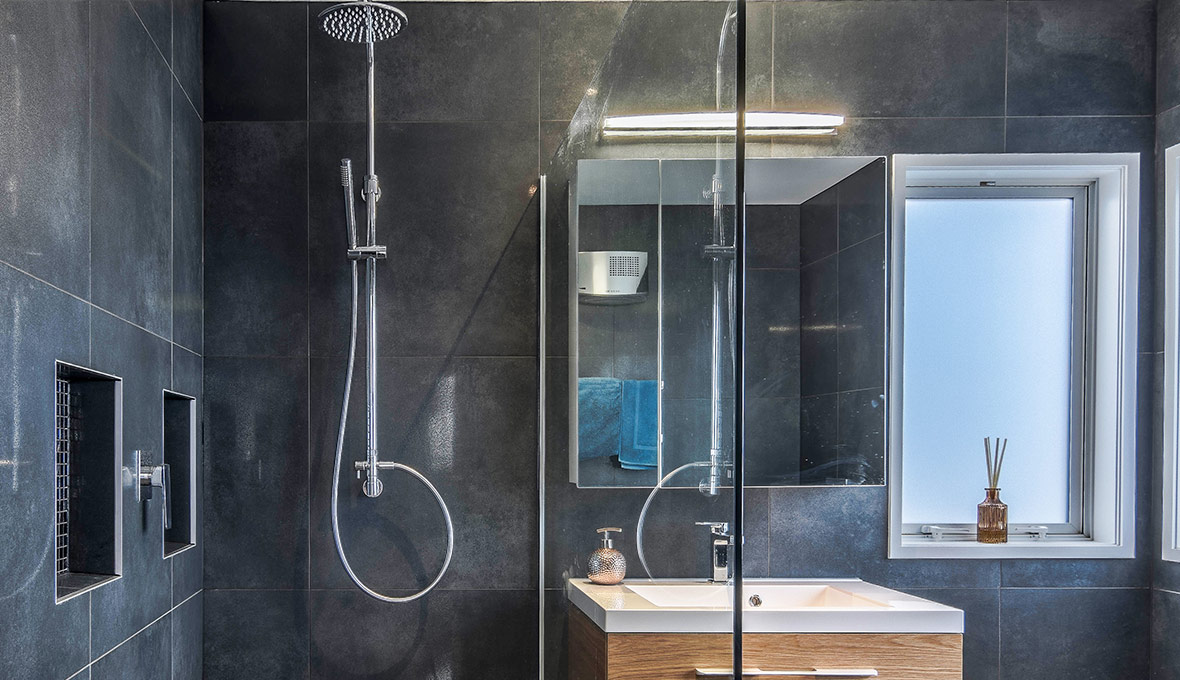