A villa transformation in Ponsonby

A well-planned renovation turns a classic villa into a modern, open and light space while staying true to its original style.

One summer a few years ago, an elderly gentleman walked in off the street and introduced himself to the owners of a Ponsonby villa. He explained he’d lived there in the 1940s and asked if he could see through the house. After a nostalgic wander around, he told them that with the exception of the enclosed front balcony and the lean-to at the back, the place hadn’t changed in the 70 years since he’d lived there.
Fast forward a few years and he’d be delighted with the way it looks today. The balcony – which he probably knew as a ‘front porch’– has been restored to its original state and the lean-to at the back re-designed to blend seamlessly with the rest of the house.
When owners Kate and Dave, who bought the house in 2007, set out to renovate it, they sought to restore the beautiful features of the villa and, at the same time, modernise the living spaces – essentially combining the period features on the outside with modern living and creature comforts inside.
“We believe clean modern interiors with modern fixtures and fittings work really well in a well-presented period home.” Re-instating the front ‘porch’, including fretwork, balustrades and balcony, was their number one priority.
They also wanted to maximise accessibility from the living area to the balcony, which receives the afternoon sun, and applied for Auckland City Council approval to install French doors. So far so good. But, as architectural designer Richard Furze explains, the area has a special heritage zoning which is “very restrictive for everything on the street side”. 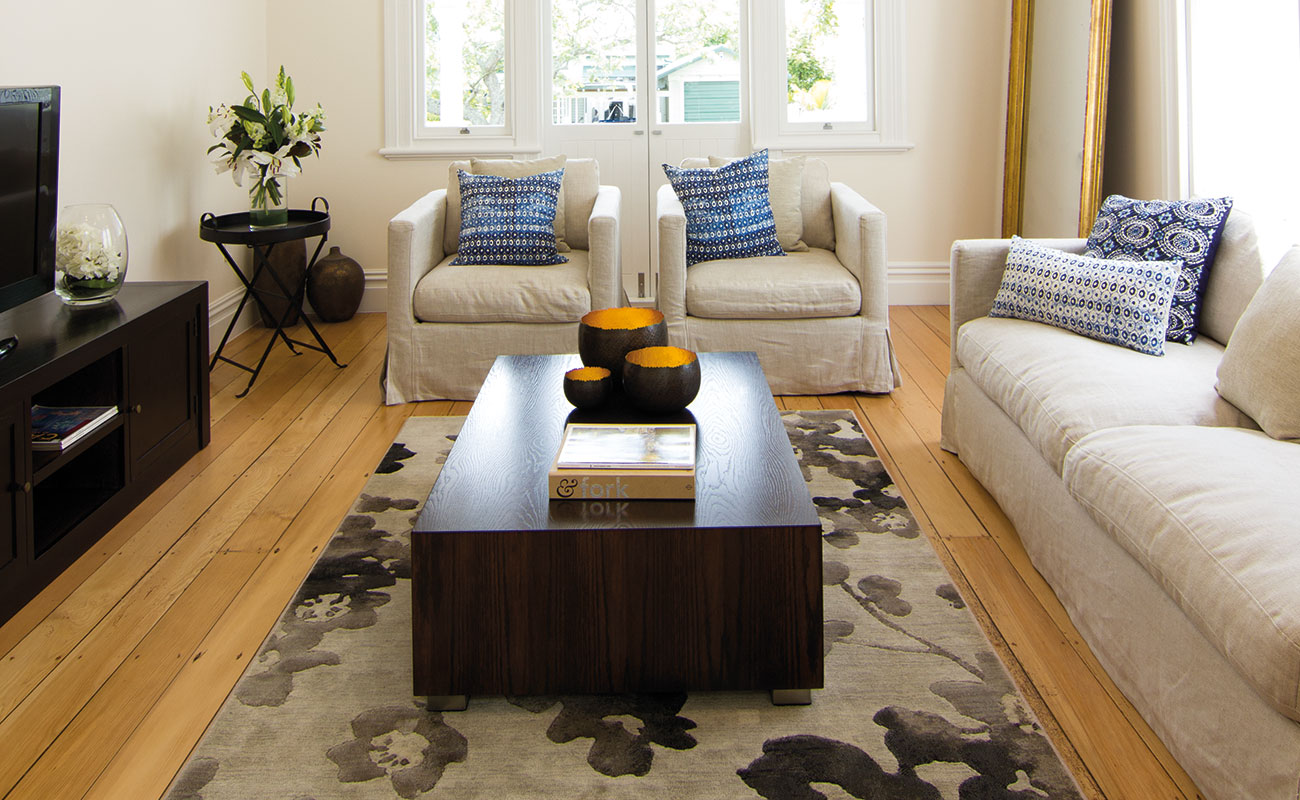 French doors were OK but they had to be designed to resemble the double hung sashes which would have been in place originally.
This was achieved by building the lower door panels to mimic weatherboards so that from the street, with the handrail in place, it’s not possible to tell they’re doors.
Richard says they worked closely with council over this and supervised every step of the joinery construction. It was about “looking at the existing detail and reverse engineering the new parts to match the existing,” he says.  “These doors are a first for the area and I think they are becoming a new standard for other projects.”
Heritage, or ‘special character’, houses have come in for increased attention under Auckland’s draft Unitary Plan; “There are a lot more heritage overlays that place huge restrictions on pre-1940s houses so you need to be very clear on your intentions when purchasing one,” says Richard.
Over the past 16 years he’s worked on a huge number of heritage style houses and liaised closely with the council’s heritage team to ensure the rules are interpreted correctly and there are no issues during the consenting stage.
Richard Furze Design had been recommended to Dave and Kate by a colleague and they liked the work he’d done, particularly the Landscape Road property featured on his website.  “We talked with Richard and both thought he had some great practical ideas and an excellent understanding of what was required to make the house ‘work’.”
For Kate, a busy mum with evening homework to supervise, this included little things like the custom-built computer desk in the kitchen which enables children to use a computer without taking up space on the dining table or kitchen bench. Richard describes the Ponsonby house as being  in pretty good shape – apart from a previous renovation to the kitchen that was a bit crazy.
“The room flow out back needed some better planning but the rest made sense and was well laid out for the sun, access and flow to the backyard area.” And, he says, while planning restrictions allowed for greater flexibility at the back of the house, materials needed to add a modern twist while remain in keeping. 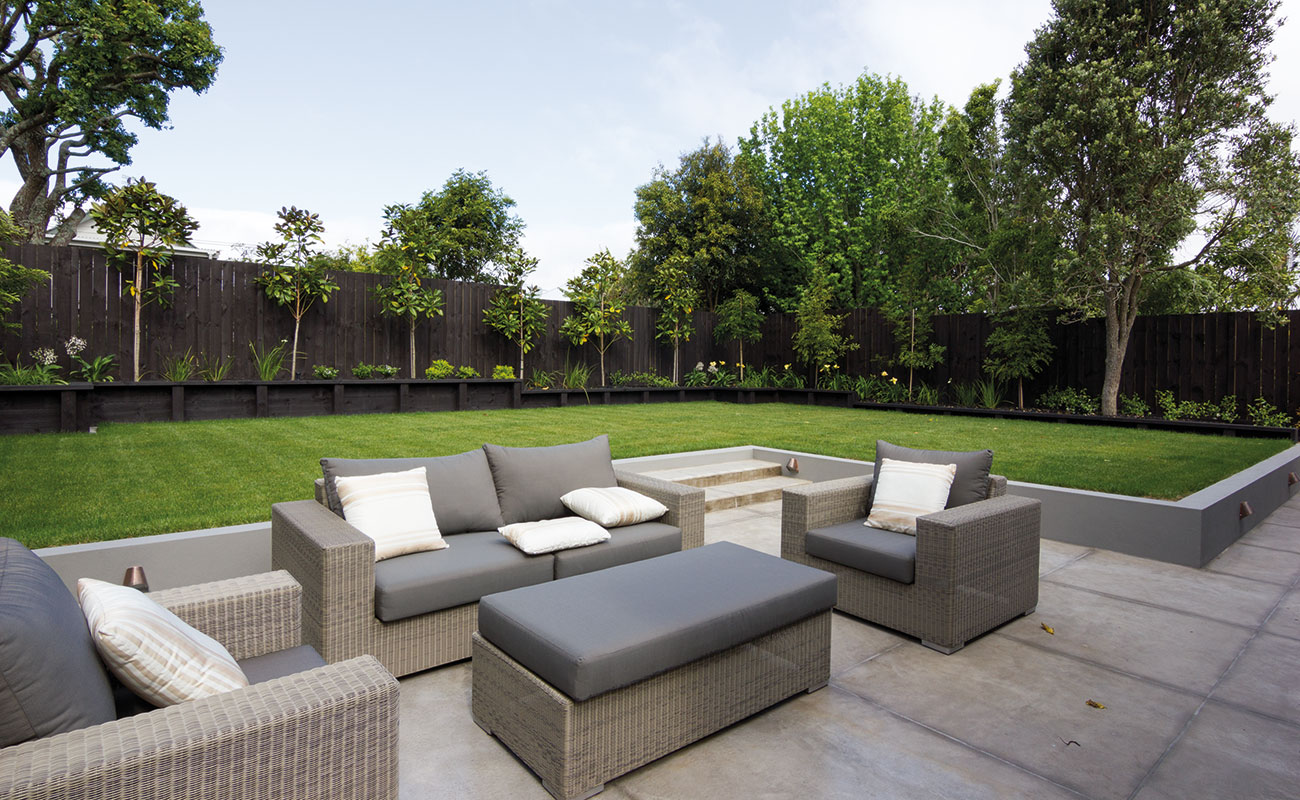 The couple had lived in the house for some time – and had three children there – before beginning the renovation project.
“Originally we had thought we’d make quite substantial structural changes in order to create a large living/kitchen space along the back of the house with French doors opening onto the garden and bedrooms at the front.
But the longer we lived there the more we realised we liked the original division of the living areas which created two warm separate spaces – one facing east and one west.”
They were also concerned that by opening it up too much, the space would become colder and less inviting.
“And once we had children we realised two more things; the separation of the children’s bedrooms from the living areas was a god-send as were the two divided living areas.” Another point was that those French doors in the front would have opened off a bedroom and done nothing to extend the living space.
There are things you only realise once you’ve lived in a house through all four seasons, they say. “The renovation was created for our family so we thought a lot about insulation, warmth and storage – and features like the walk-in pantry which streamlines cleaning in the morning; all the appliances, and the mess, are out of sight!” 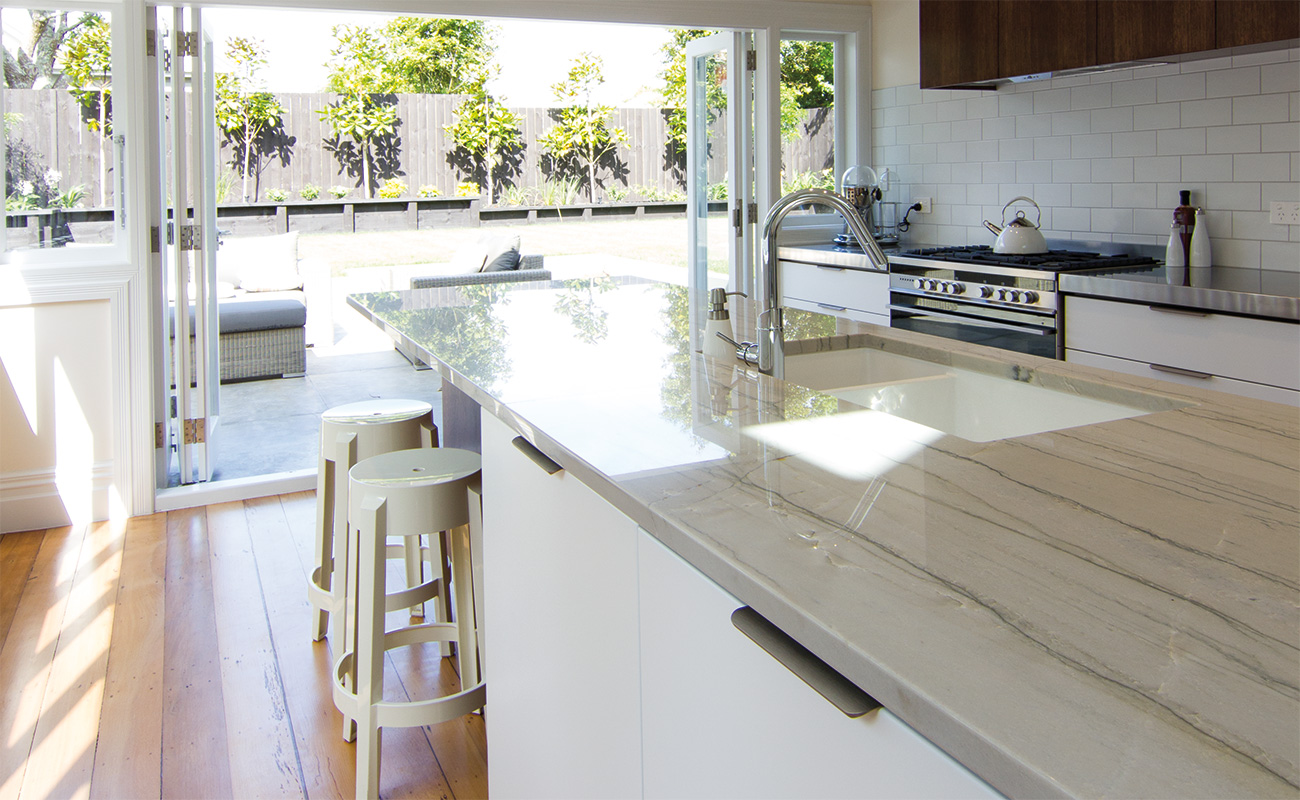 Heritage properties have often been through multiple renovations.  “It comes to a point where you have to take all the weird stuff away and get back to how the house started,” says Richard. ”This normally has cost implications. Bungalows can be a bit different as they have a more complicated layout normally but are still prone to strange flows and access around the house.”
The Ponsonby house was fairly uncomplicated he says. “It had a simple lean-to roof at the back but we needed to clean up the beams in the interior spaces and around the kitchen that visually broke up the spaces and changed the proportions of the rooms. With this done, and a new kitchen, it gives a great feeling of space and ties it back to the existing layout of the house.”
Richard says they devote a lot of time to research when working on a heritage home.  “Anything we can get our hands on from the council or previous owners. Some great stories come out about how an area has evolved.”  Pre-1940s special character houses, be they classic villas or bungalows, are not confined to Auckland’s leafy inner suburbs. They’re a feature in every one of our towns and cities and many character ‘homesteads’ are still proudly enjoyed and cherished by families in rural areas across the country.
And, as we come to a new appreciation of the value of our heritage, there’s a growing trend to restore these homes, where possible using sustainable design principles that move them into the 21st century. 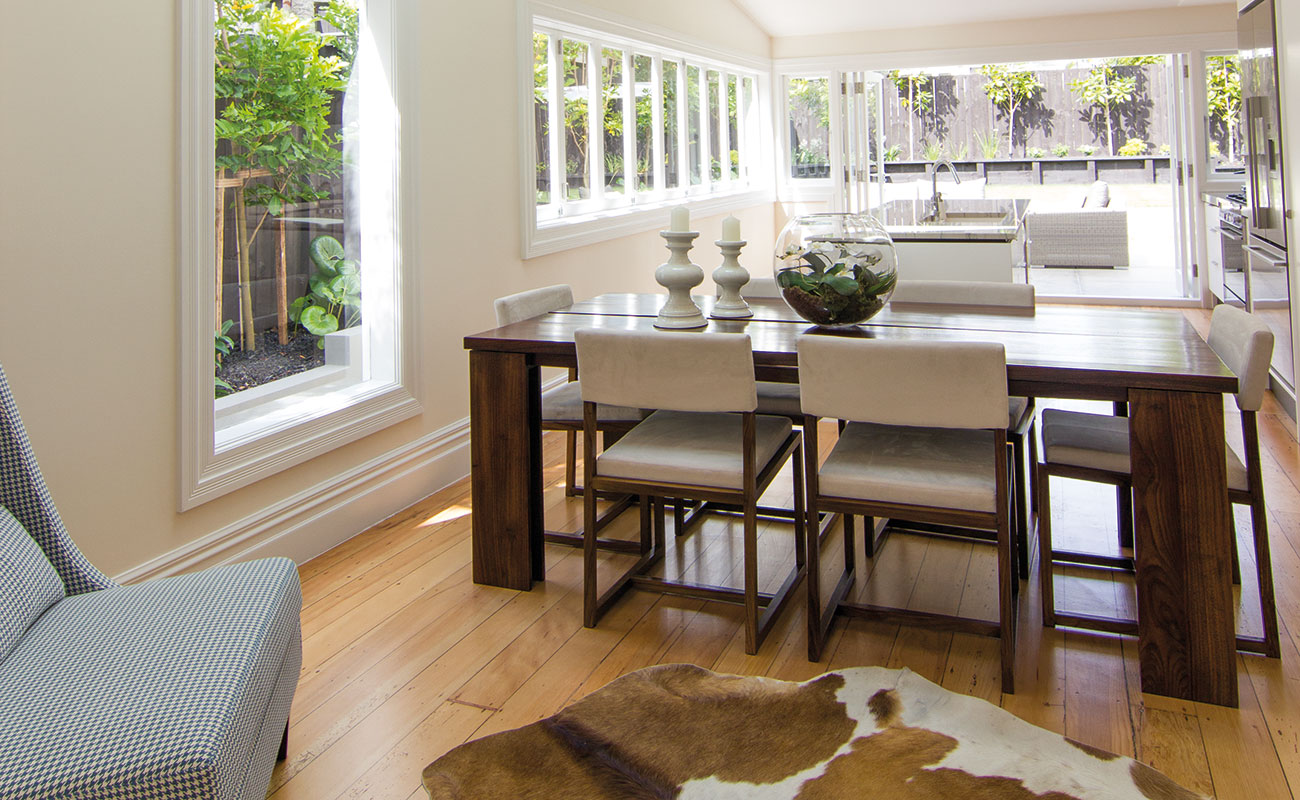 But how difficult is it to meet the needs of today’s lifestyle and still maintain the essence of an older home? Keeping the scale of the work in the same vein as is presently there means it’s normally pretty easy, says Richard.
“Garages are the most challenging [in urban areas]. Back then there wasn’t a big emphasis on cars or toys that needed storing. Now we want lock-up double spaces in places that sometimes don’t allow decent access and these can ruin the aesthetics of the home if not treated properly.”
Council [in Auckland] also has stringent rules around this so there needs to be clear understanding of what can, and cannot be done, he says.  “Streetscape is key.”
Richard says it’s also important to note that pre-1940s houses with heritage controls will demand a higher budget than homes without character.  “You have higher ceiling lines and the decorative trims required will always cost more. Timber joinery is more costly than aluminium and takes more work to install so the main bones of the building will be more expensive when you’re trying to respect the existing character of the house and the surrounding area.”
A renovation project is a taxing exercise, particularly for people juggling family life and work commitments; so would Kate and Dave do it again and would they do it differently?  “We’ve definitely caught the renovation bug and want another project.
“We both found the whole process, from design through resource consent, construction and finishing extremely rewarding and we’re thrilled with the finished product. We hired an outstanding builder and we’d definitely use him again – there’s nothing we’d do differently.”
The before and after images tell the story. A somewhat tired looking Ponsonby villa has been returned to its former glory by a designer who understands and respects the period and the homeowners are enjoying a space that’s modern, open and full of natural light.

This article by Patricia Moore featured on page 64 in Issue 010 of Renovate Magazine. Renovate Magazine is an easy to use resource providing fresh inspiration and motivation at every turn of the page. This is not a Refresh case study. 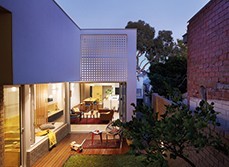 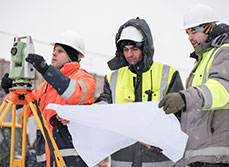 When is the best time of year to renovate in the UK? 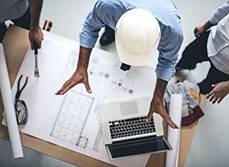