Most of this bungalow’s interior had been updated, except the bathroom. Having recently purchased the property, the new homeowners wanted the bathroom to match the rest of the modernised home. 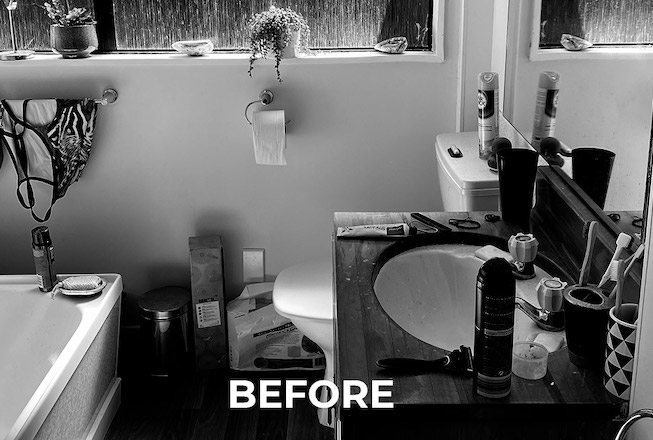 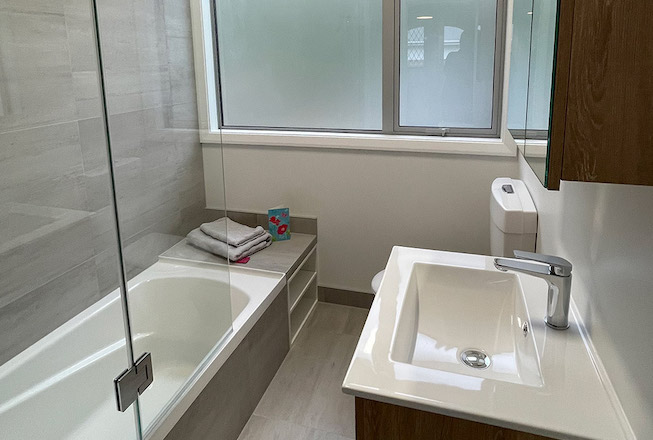 While many properties in Glenross were built in the 1980s, this home displays the charm of earlier times. Built in the 1920s, the bungalow has a distinctive exterior that has been well maintained. Much of its interior had also been refurbished over the years to meet modern tastes. Most that is, except the bathroom.

Homeowner James knew the bathroom needed modernising but was unsure how to go about it. So, not long after purchasing the home, he reached out to his local Renovation Consultant, Sarah Arnel.

During their initial consultation, James explained to Sarah that he liked the bathroom’s layout but the functionality needed improving. Without the time and know-how to manage the project himself, he was relieved to hand the reins over to Sarah’s project manager, Raumati.

Raumati had James’ ideas drawn into design concepts, which she then assessed to ensure their feasibility. Initially, James wanted two custom shelving units built in at the end of the tub, but Raumati advised that sourcing the waterproof materials needed would be difficult to achieve within the $30,000 budget.

As an alternative, Raumati proposed a bespoke cabinet that could easily be waterproofed and tiled, blending seamlessly with the tub. Ultimately, the goal was to utilise the spare 400mm of extra space to create storage. James was happy with this clever fix and approved the plans.

Construction and the Council

Though there was no firm deadline, James wanted the work done as soon as possible. Waiting for council consent was the longest part of the process. Fortunately, dealing with the council is all part of Refresh’s comprehensive project management so Raumati handled it.

Once approval was given, construction began. From her network of professional contacts, Raumati organised the builder, plumber, gib stopper, tiler, electrician, plasterer, painter and joiner - a nightmarish task for an already busy homeowner. She also sourced the building materials, including the Aqualine gib for waterproofing.

The biggest elements of the build phase were raising the ceiling to make the room seem larger and removing a dated arch inset, to provide space for more modern features. The bathroom renovation, initially projected to take five weeks, was finished four days ahead of schedule.

Keeping the footprint the same eliminated the need for complicated, and potentially expensive, plumbing and electrical work. Updating the individual elements within the original layout, however, created the high-quality finish James wanted while keeping the renovation affordable.

Replacing the art deco arch is a sleek and modern medicine cabinet, built with timber to match the vanity below. Grey tiles line the shower walls, custom shelving, and floors. The combination of grey tile with warm timber creates a serene and balanced colour palette, which is further enhanced by the soft light filtering in through the new frosted glass windows. A new porcelain toilet and chrome hardware complete the transformation. Now, the bathroom’s design complements the home’s modern interior.

James’ decision to enlist Refresh’s help was a win in every way. Sarah and Raumati delivered the renovation well within the agreed timeframe, provided a smart solution that accomplished James’ design goals without going over budget, and handled all of the application process for council consent.
In admiration of the team’s abilities James says: “We’re very grateful for the service that you provided and we’ll definitely be leaving a glowing review. Raumati, we thought you were great with us and were in tune with what we wanted.” 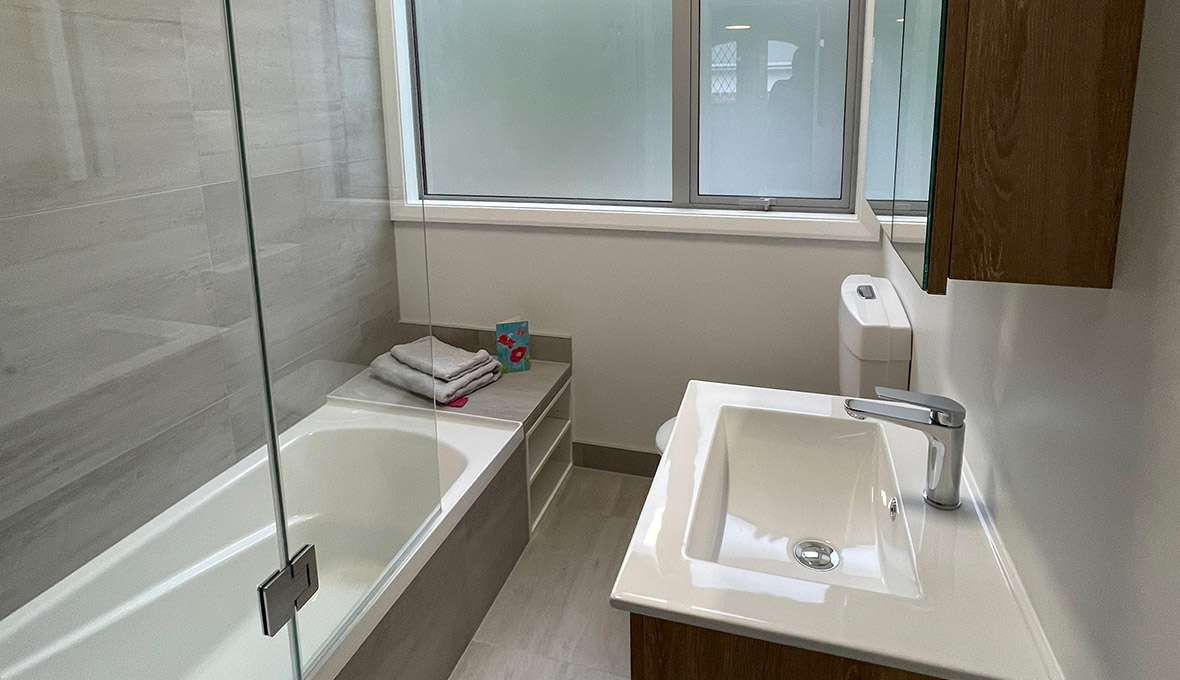 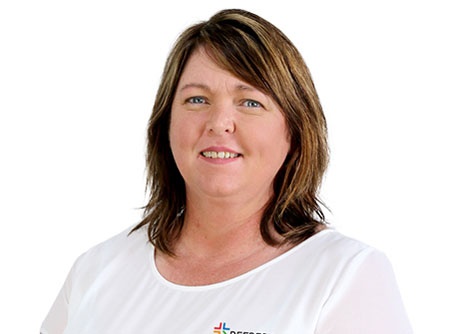 Sarah Arnel is a franchisee of Renovation Franchise Ltd, doing business in Dunedin. 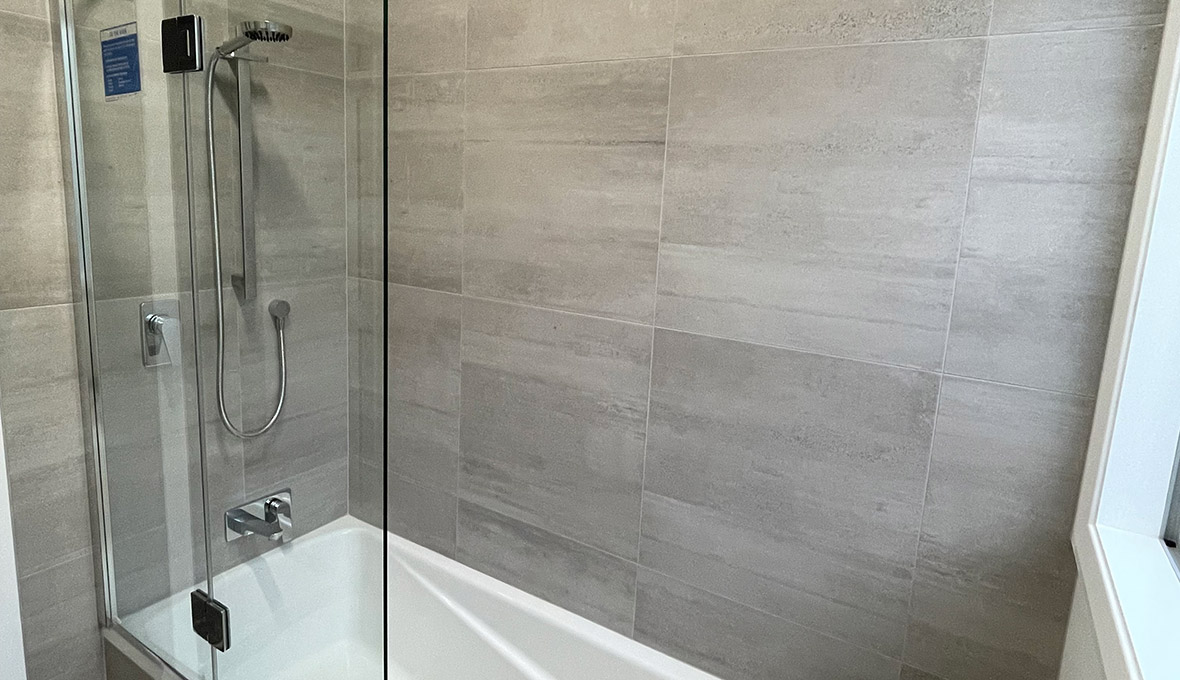