An innovative and sustainable home design

The unprepossessing façade of a small, double-fronted weatherboard home in Seddon, Victoria, Australia reveals little of what lies beyond.
But don’t be fooled by this – it’s no ordinary home. Two interior living spaces bookend a central garden space; this is bounded by a skeleton of exposed and unclad framing.
Sliding glass walls open the dining and living area up to the elements, and a rill along the exposed side of the house plays host to native plants and happy fish. It’s a bold and daring play on space and structure that plays homage to the stark beauty of the unfinished and incomplete. 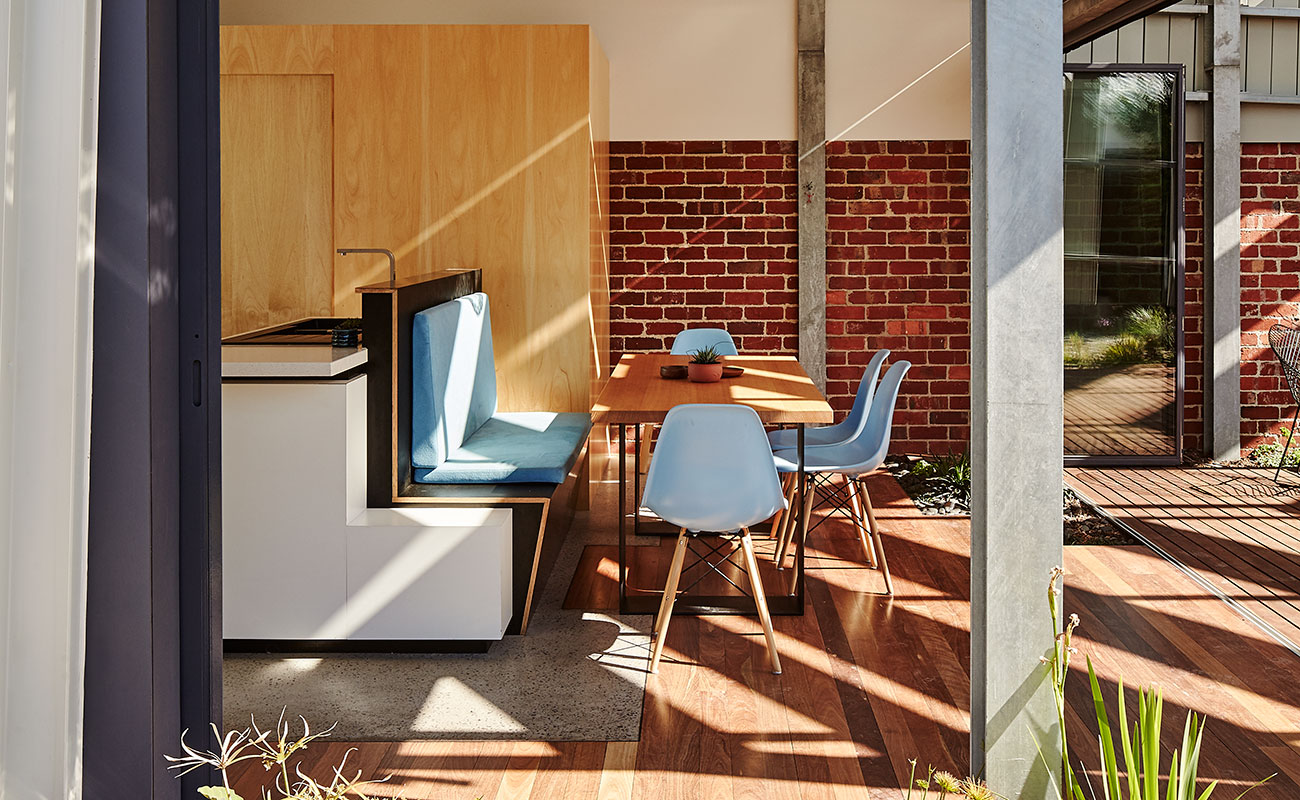 Cut Paw Paw (named after the parish in which the house is located) runs north to south on a long site. Owners Derek and Michelle were keen to extend their existing living space and incorporate a garden and music studio into their home.
They also had a slightly more unusual request – that any renovations be “ridiculously inside out”. To this end they employed the services of Andrew Maynard, an architect known for his ability to push the envelope when it comes to dramatic design.
Many choose the pragmatic path when it comes to extending their home – innovative design playing second fiddle to utility and usability. But the owners of Cut Paw Paw wanted to take the path less travelled. 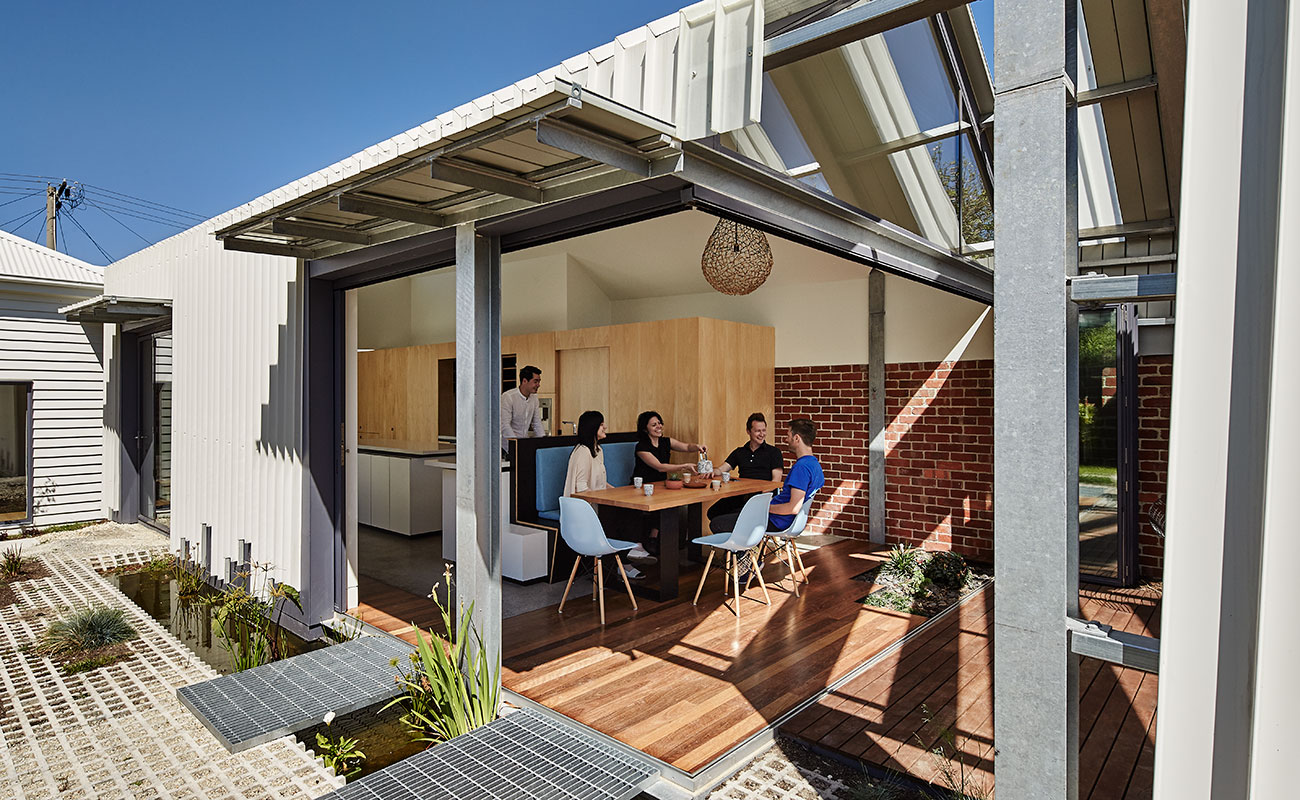 Enamoured by the look of unfinished homes, the drama and promise of wooden and steel frame, the couple wanted to bring some of this aesthetic to their renovation.
“Unfinished homes are a jungle gym, a relic, and a skeleton full of play and imagination,” says Maynard. “Often it is when a building is at its most beautiful.”
In terms of functionality, the new home needed to incorporate a music studio that was far enough away from the main home to cut down on noise, but also attached to the main structure in some way. The couple also wanted a garden space – somewhere they could relax and unwind – and an extended living and dining area. All these extensions needed to reflect the unfinished aesthetic, as well as being sustainable, comfortable and user-friendly. 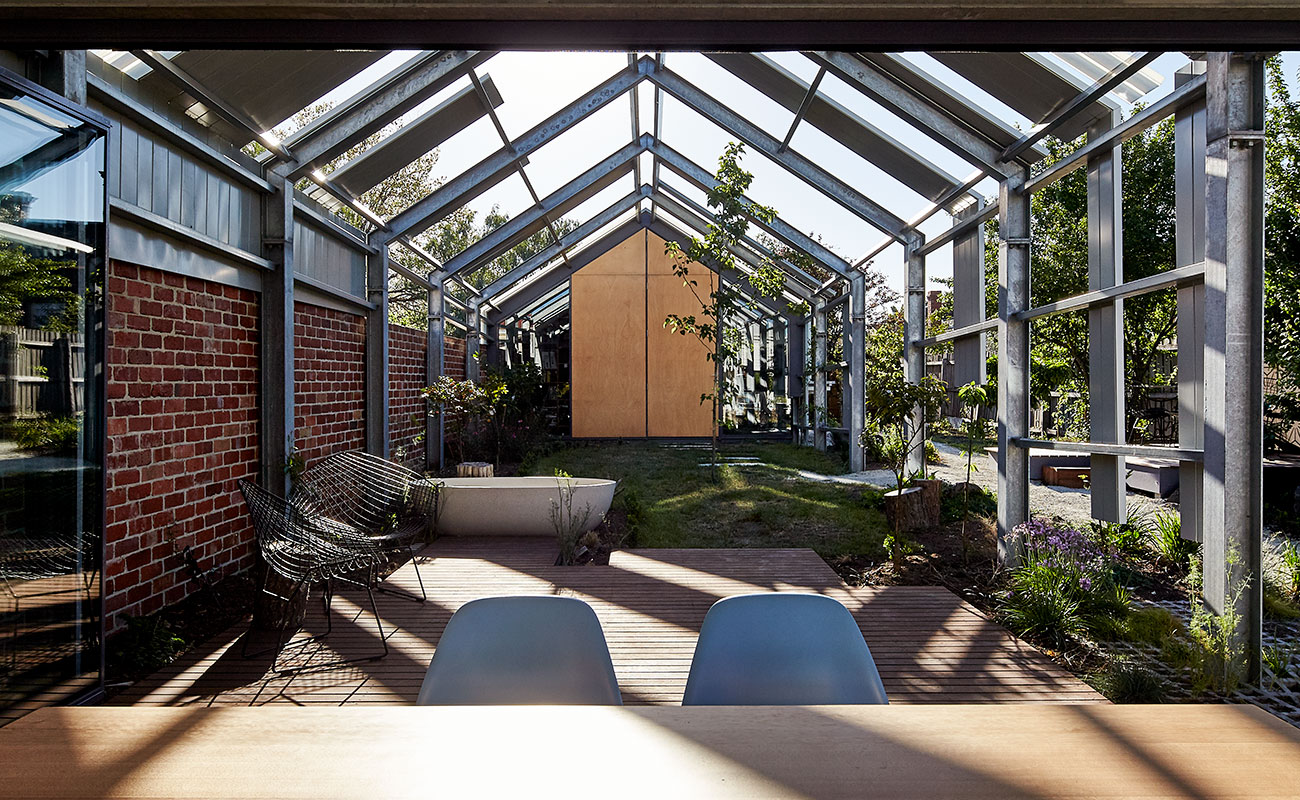 Maynard says that he and his team tested out many ideas to facilitate the ambitious design. “We employed ideas that were tested and successful such as sliding walls, bifold door and decks,” he says.
The sliding walls are used to their best effect in the living and dining space that opens on to the garden. Only one steel beam is used to support the corner space – the two adjoining “walls” can be retracted to open up the entire end wall and half of the right wall. This creates a seamless flow between the indoor and outdoor spaces – the floorboards inside are flush with the decking outside area, creating a smooth and undifferentiated whole.
The garden space is possibly the most dramatic feature of the home. Here the exposed frame plays a starring role, the upright beams and angled roof frame create a look similar to the bones of a crumbling church. An exposed brick wall that doubles as a fence on the far side of the space is continued through from the living area. It’s rustic and textual, and the exposed frame casts geometric shadows across its rust-red surface. 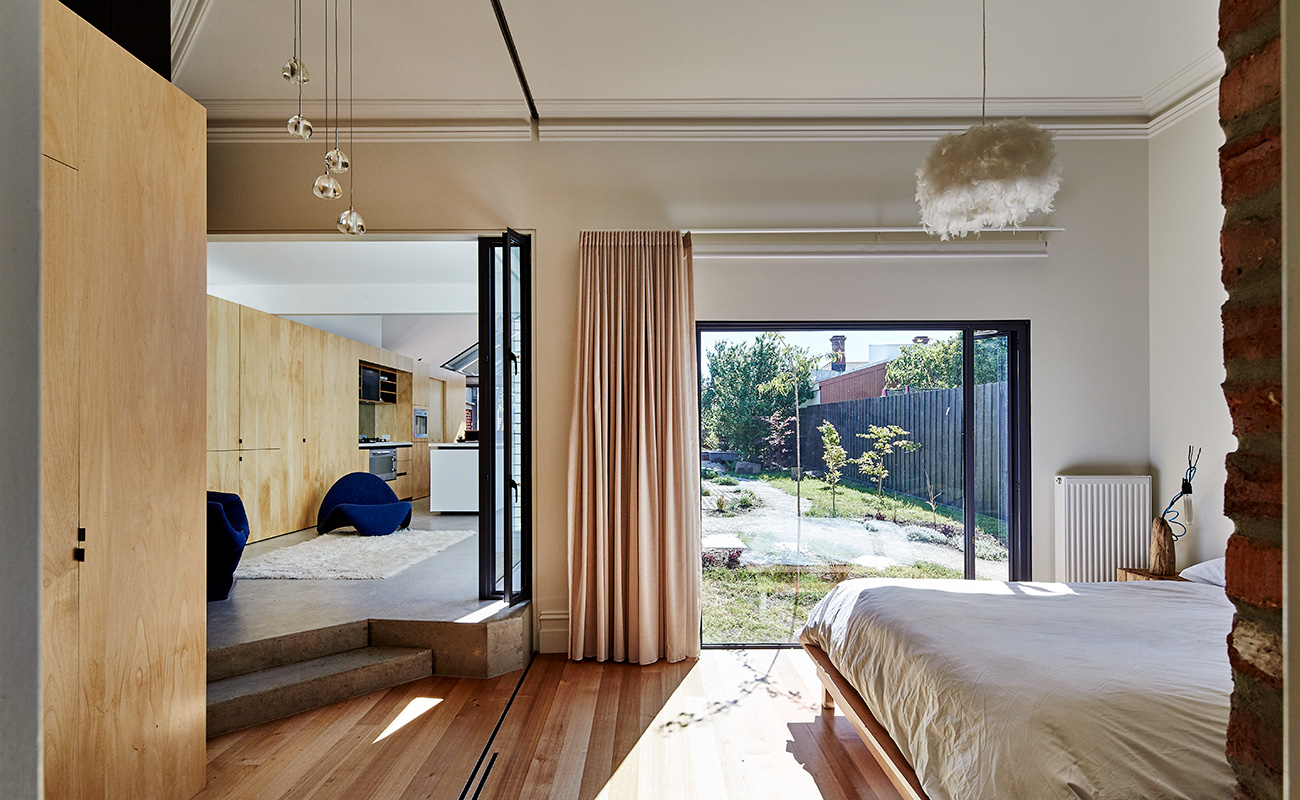 The space is grass-covered and incorporates hardy Australian natives. There’s also the playful addition of an outside bath; you can envisage the enjoyment derived on a warm night under the southern stars.
The music studio is located at the very back of the property. Accessed by ceiling height wooden doors, the studio also features floor-to-ceiling glass that looks out on the garden and the home.
Sloped ceilings inside continue the church-like sense of space, and the window and brick wall that make up one corner of the studio border for a small garden planted with succulents.
Sustainability was a key factor in the creation of this space. The position of the windows and openings were designed to optimise the passive solar energy of the sun, which cuts down on the need for electronic heating and cooling devices.
“We faced the doors and windows northward and ensured that the spaces received huge amounts of winter sun, yet absolutely no summer sun. The internal temperature remains quite stable throughout the year,” says Maynard. 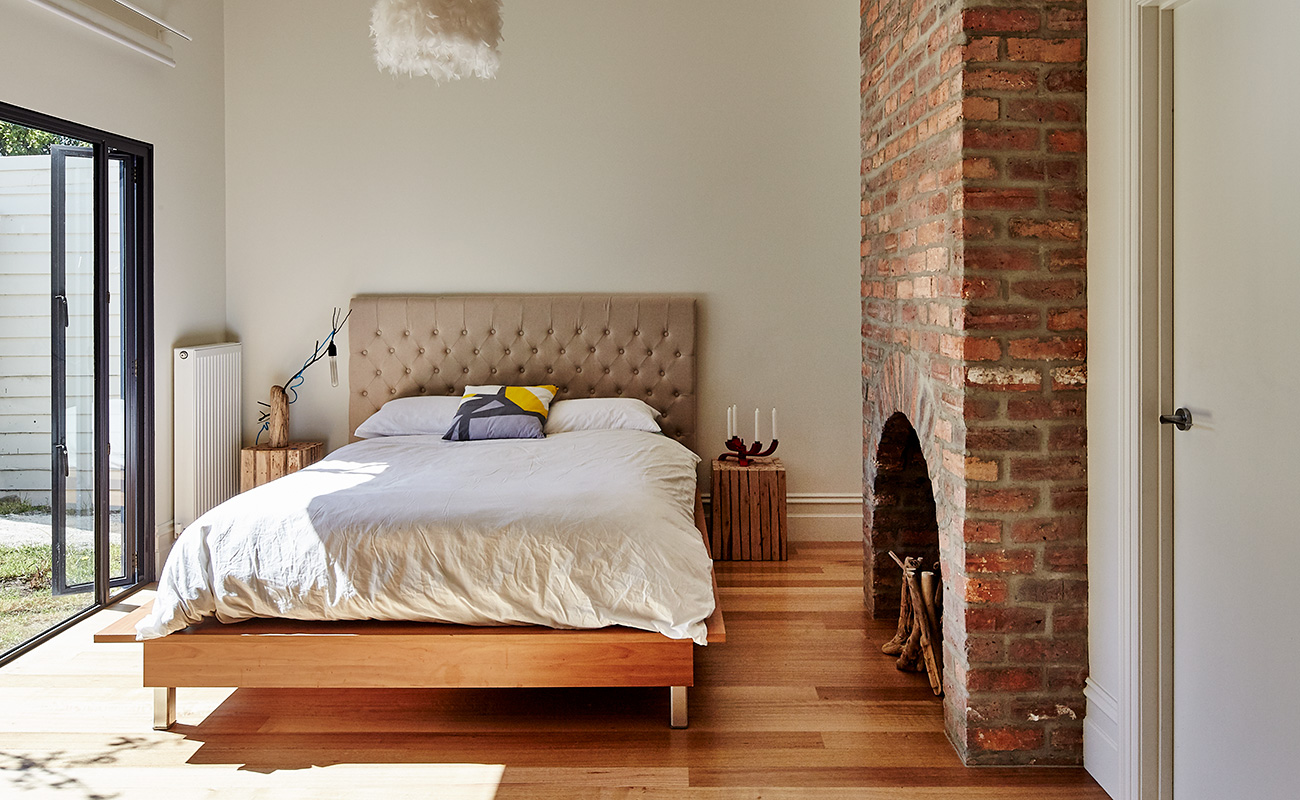 All the windows are double-glazed and the white roof and outer walls reduce the urban heat sink and minimise the need for air conditioning.
Water is also used as a cooling device in the home. A rill has been installed in front of the largest north-facing opening of the house.
Plants and fish both call this home, and steel grills run flush with the living room flooring and the outdoor paving area to create a practical access way.
The rill also acts as a passive cooling mechanism; as the water evaporates in the heat, it moves through the home and helps to lower the temperature throughout.

This article by Joanna Mathers featured on page 78 in Issue 015 of Renovate Magazine. Renovate Magazine is an easy to use resource providing fresh inspiration and motivation at every turn of the page.

Get in touch if you're thinking about renovating

If you would like to discuss options and ideas for your next renovation project, please use the enquiry form alongside to provide us with your contact details. We will get in touch with you at a time that suits you to discuss your project. If you would like to provide us with more information about your project, we have a more comprehensive enquiry form on our "Get in touch" page too.
*All information is believed to be true at time of publishing and is subject to change. 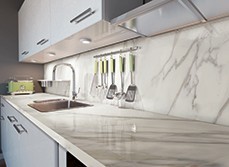 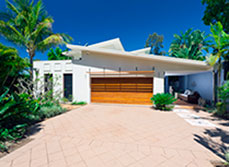 Converting a garage into a living space in Australia 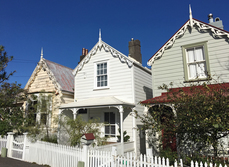 Villa Woes: turning your rundown villa into a wow home