Transformation of an Auckland Bungalow

An ambitious renovation in Auckland's Mt Albert has seen a tiny bungalow transformed into a statement-making family home.

When Prue and David Simpson went to see a two-bedroom bungalow bordering Mt Albert’s Chamberlain Park Golf Course five years ago, they weren’t even looking for a renovation project. But they were blown away by potential of the 998-square-metre northwest-facing site, just a ten-minute drive from downtown Auckland. At the time they were living in the same suburb, but on one of its busiest roads. It was a world away from the tranquil and private oasis that this new house provided.
They immediately saw the potential to excavate and build a large extension underneath, which is now a family-friendly living space for them and their children, Caleb, now 5, and Amelia, now 4. They had originally imagined a second lounge and additional bedroom underneath too, but quickly realised they didn’t really need the space. It’s obvious now that they made the right decision, as the finished home feels expansive yet well proportioned. “And there are already more than enough rooms to clean,” laughs Prue. 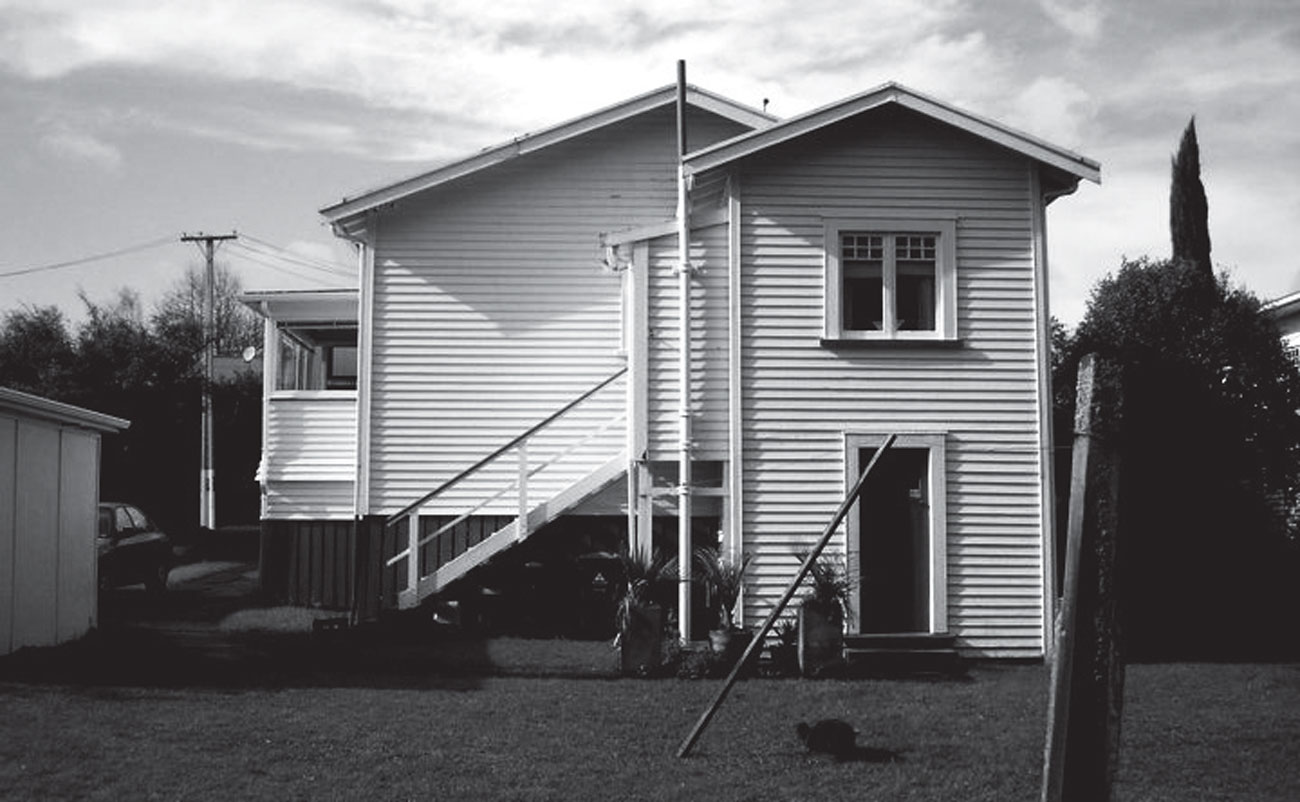 An old bungalow in a quiet Auckland neighbourhood

When they first moved in however, the 86-square-metre bungalow was “poky” and in completely original condition, down to its old copper wiring and shonky piling. There was flowery wallpaper on the walls, tired old carpet and a lean-to toilet. “We had the architects over and had plans drawn up reasonably soon after we moved in,” says Prue, “but we realised if we were going to do it, we wanted to do it right.”
This meant waiting until they had the money to complete everything on their wish list. Now with four bedrooms plus study, three bathrooms, an expansive new open plan living, dining and kitchen area, new laundry, garage and ample storage, they’ve more than doubled their original floor space. 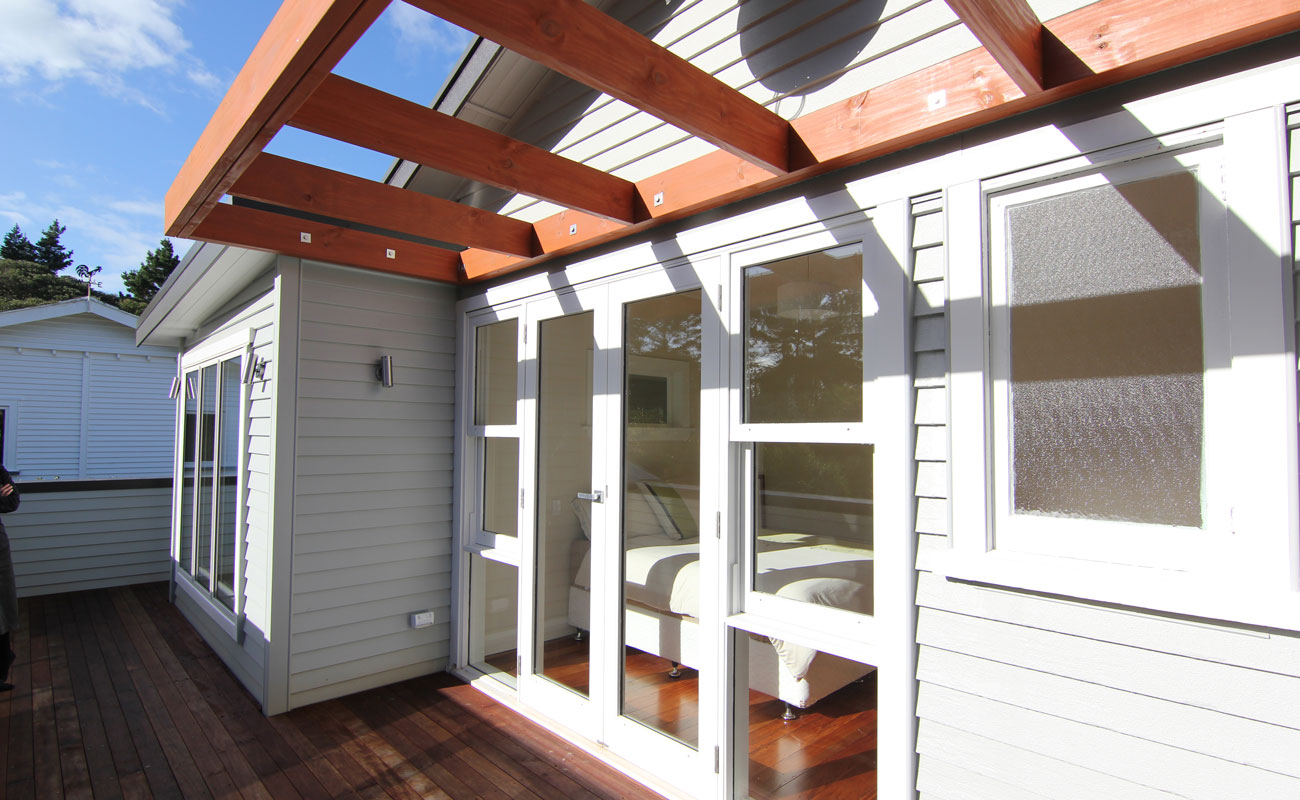 The first stage of the renovation was tackled two years ago, with a chimney removed, a window put in and a wall moved in the living area to create what is now Caleb’s bedroom. Even now, with new gib, insulation, two new bathrooms and a wraparound deck off the master bedroom, the old part of the house is still clearly identifiable thanks to the weatherboard exterior wall being left largely intact. “We decided to keep the original external wall as a bit of a feature,” says Prue. “And that way we don’t have a huge expanse of plain wall in the middle of the house.”
While there was space to walk underneath the house already, a lot more excavation work was required. “The whole job was supposed to take five months,” laughs Prue. “But once the digging began and we realised how much steelwork was needed to reinforce it all, it ended up taking almost a year to get it to the stage where we were able to move back in.” This meant they had an extended summer holiday bunking down at the family beach house, “which wasn’t a bad thing, of course.” 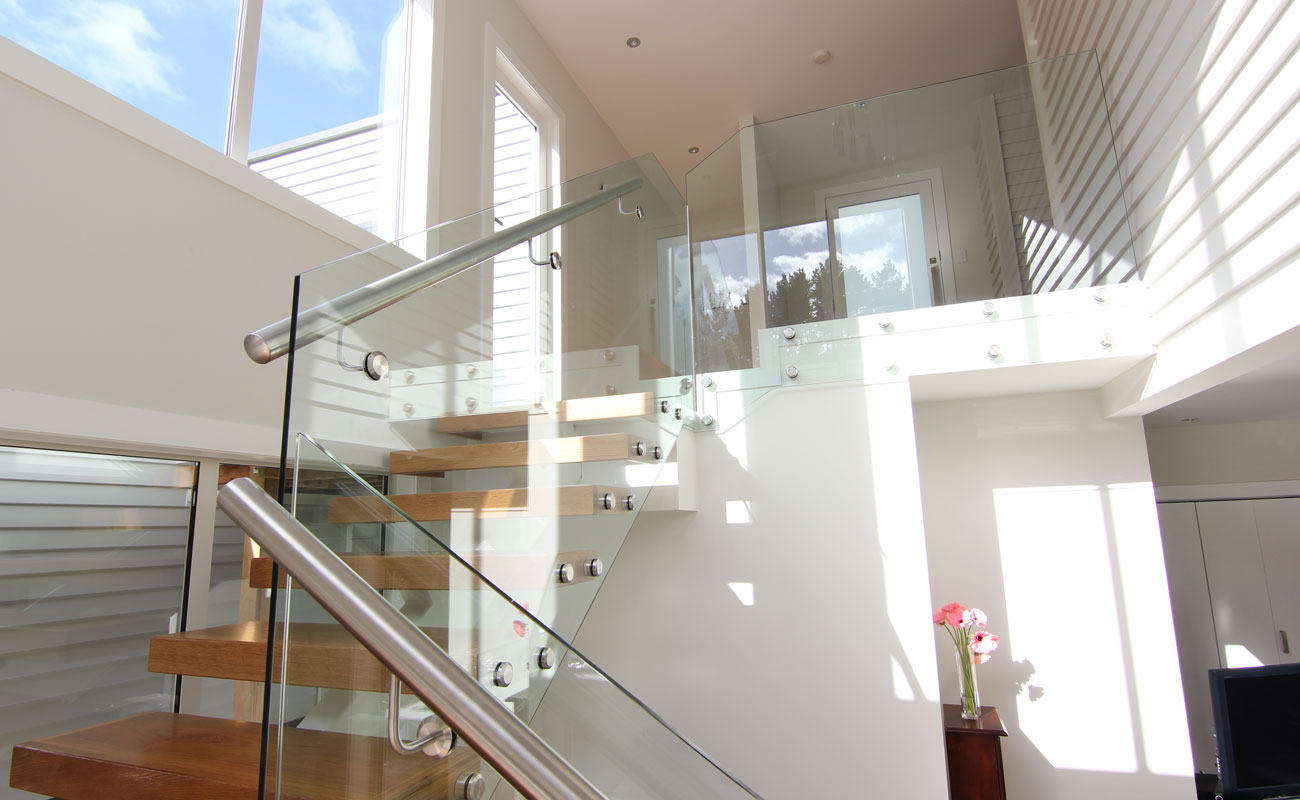 The most impressive new feature of the house is the entranceway, which has a custom-built white oak staircase built by Top Flyte that snakes down through a double height atrium, connecting the upper and lower levels.
Designed by the engineer and the architects, the staircase was assembled on site from three separate pieces and has an indoor garden below. The space is flooded with both natural light from the large windows and the modern crystal chandelier from Lighting Direct, which has a prism effect when it catches the light. At night when it is lit up the fixture is equally as striking, and can be seen through a new internal window in the master bedroom. 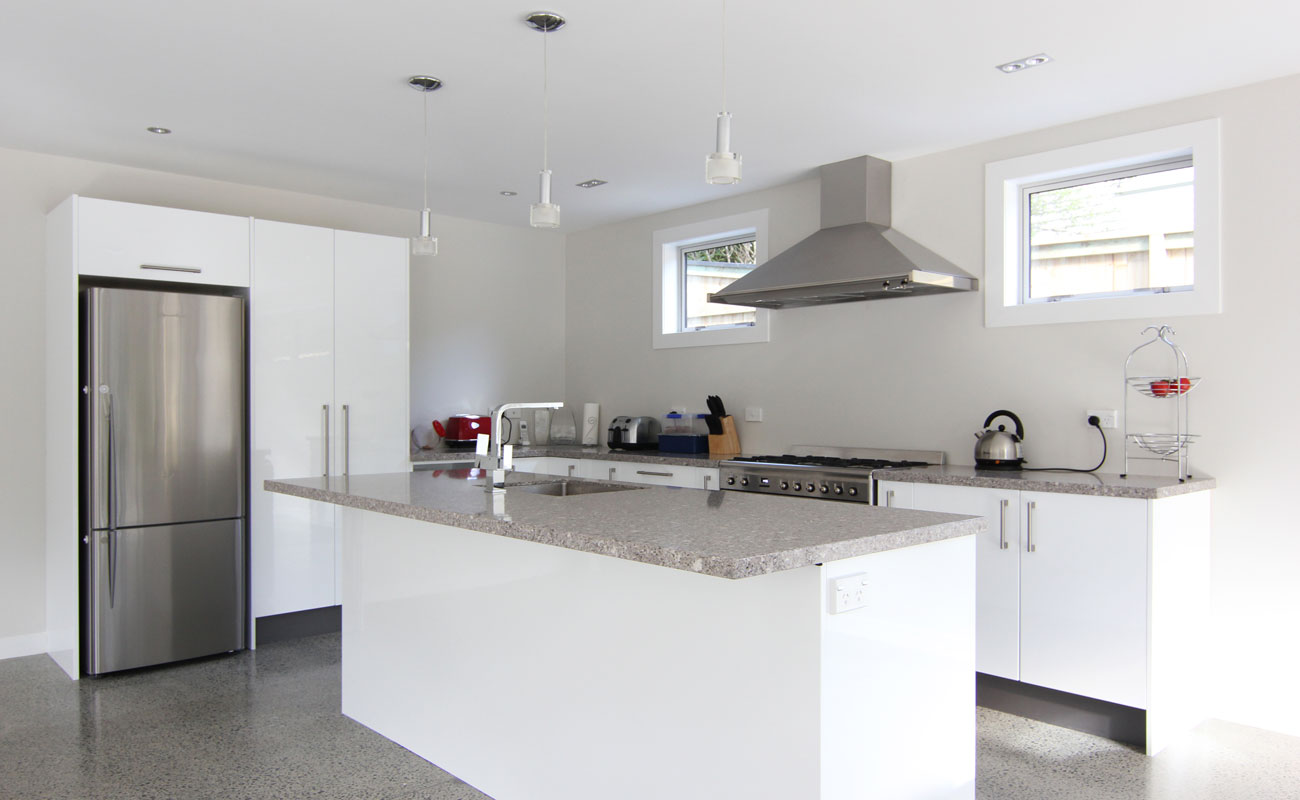 Downstairs, the open plan living, dining and kitchen area has a polished concrete floor, recessed lighting and large French doors opening onto a courtyard surrounded by built-in wooden seating. Concrete columns will eventually have schist stone added, and ambient lighting will be installed. Beyond, the section stretches toward a creek and a tree-lined reserve. Pukekos are regular visitors in the garden, as are stray balls from the neighbouring golf course.
The rear of the section has now been subdivided and sold to a family who are planning to build a modest-sized, eco-friendly home, but there is still plenty of space for Prue and David to landscape and for the family to enjoy the sunny site. “We’re going to plant it out in natives and have vegetable gardens,” says Prue. “We like to grow our own food.”
Back inside, there’s a slick white kitchen from Kitchen Studio, featuring high gloss cabinetry and a large Smeg six-burner hob and oven. “We wanted the big stove but that of course meant we needed an even bigger range hood,” she says. “That in turn dictated the size and placement of the windows behind it, but we’re really happy we stuck with it.” Two other clever features Prue points out in the kitchen are the Acquatica Oblio tap with attached water filter, and the corner carousel cupboard which means no more scrabbling around looking for lost pots and pans. 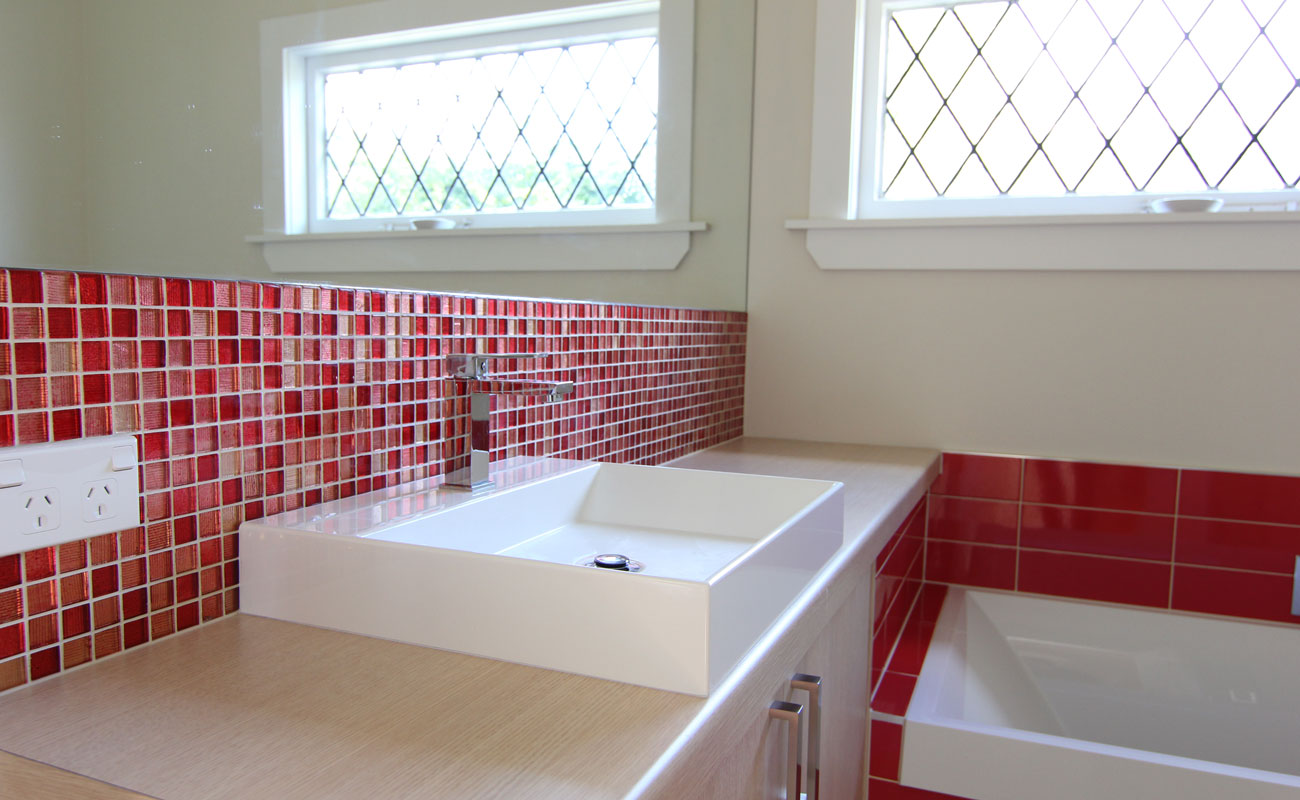 Upstairs, the new family bathroom has an oversized Villeroy & Boch square-angled bath, lending the room a luxurious feel. “I originally wanted an old claw foot tub, but it was going to be too heavy and require too much expensive reinforcing of the floor,” says Prue. The walls are lined with bold red oversized subway tiles, while smaller red and gold glass tiles form the splashback. This colour combination, together with the pale wood grain cabinetry, is repeated in both the guest and master ensuite bathrooms. “We decided to go with the red to pick up on some of the tones in the Rimu floorboards and provide a point of difference,” explains Prue. “Everyone seems to go for grey or white these days.” 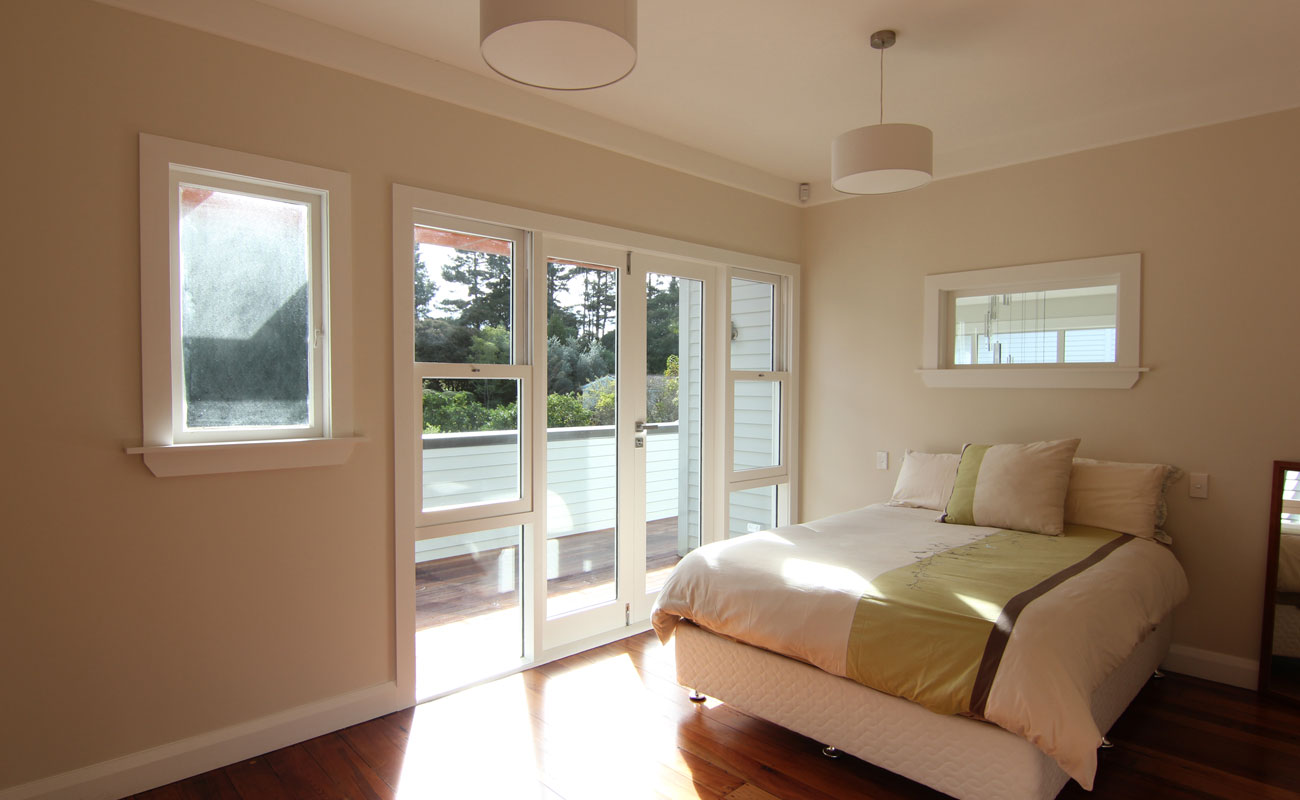 A master bedroom with a private kwila deck

The sunny master bedroom features French doors and custom made sash windows in a nod to the era of the original house. They open out onto the upper-level Kwila deck that overlooks the garden out to the trees beyond, and provides an alternative access point to the house. “You could also sit out here and have a glass of wine in the evening and escape the children downstairs,” laughs Prue. All the bedrooms now have generous wardrobes, a new heat pump and DVS system have been installed, and all the wiring and electrical work has been updated by Lloyd Electrical.
The façade of the original bungalow has been painted but kept intact, and now a floating walkway leads to the oversized frosted glass front door. A new garage with internal access has been built, and there’s a new driveway for the rear house. But from the quiet suburban street there’s no real hint of the dramatic transformation that’s gone on beyond.
And that is the way the family like it. “It’s a big house, but not too grand for the site,” says Prue. And she’s right – the first time renovators have wisely resisted temptation to over do it.

“I wouldn’t change much but next time I’d definitely be a lot more realistic about how long it’d take,” she says. “Although I’d probably need quite a bit of convincing to do it again.”
You might be interested in how much does a home extension cost?

This column by Katie Newton featured on page 72 in Issue 008 of Renovate Magazine. Renovate Magazine is an easy to use resource providing fresh inspiration and motivation at every turn of the page. 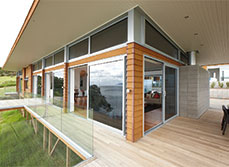 Options to update your joinery 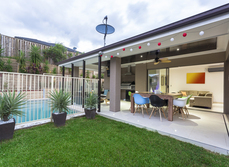 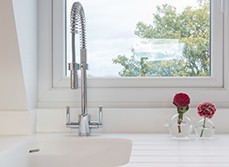