This century-old apartment was upgraded to meet the modern age of its surrounding bustling city. 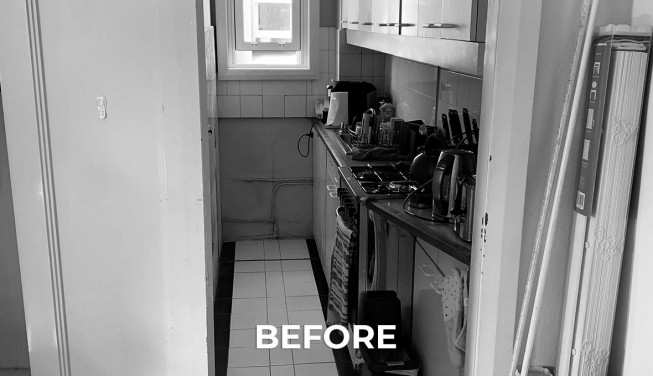 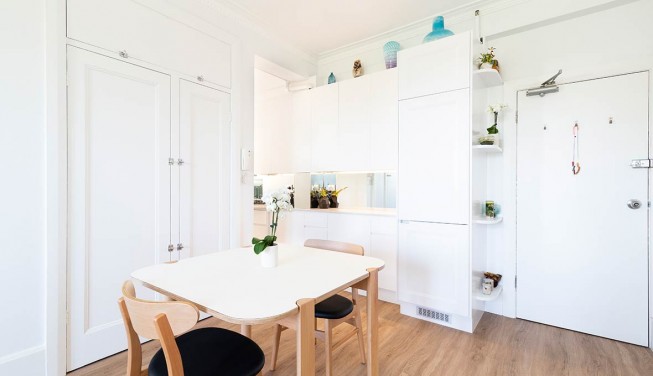 Belonging as a city pad to the homeowners (who live outside of Sydney), this more than 100-year-old apartment was ready for a full renovation.
From the beginning, they knew it wouldn’t be a simple project; because of both the age and the tight 40m2 floor space. For these important reasons, the homeowners wanted to find a team of renovation experts they could trust - and from afar.
As they were eager to get started it wasn’t long before their search brought them to Refresh Renovations. Discovering , they got in touch right away and dove straight into the process.

From Briefing to Design...

During the initial briefing, the renovation consultant made it his first priority to determine what the key objectives were for the project. During this time, the homeowners talked mostly about space. There wasn’t enough of it in this one-bedroom apartment and they wanted to create more.
Led by this mission to expand the small apartment, the renovation consultant brought in Anne Potter, a remarkable space planner/interior designer. Having previously worked with her to design what he calls “the tightest kitchens you’re likely to see anywhere but on a boat,” he knew she was the talent they needed.
Together, Anne, and the renovation consultant's team developed a concept for updating the apartment.  The main aspects they were to focus on included a new kitchen, bathroom, flooring, electrical rewiring, and repainting all interiors with a fresh palette.
All up this project priced at $110,000 and was set for a four-month timeline - both of which were met by completion of the renovation.

Extremely tight at only 1500mm wide, the kitchen was the biggest challenge of all areas. The masterstroke for this constriction was simple but effective. We needed to extend the joinery out of the kitchen and into the living room to offer more storage and create the illusion of a larger kitchen.
As the builders took on this reconfiguration, the fridge was also integrated into the joinery and located next to the dining table. After that instalment, the remaining area was small. But a plan had been designed to facilitate the oven and stove.
Opting for engineered stone, the benchtop was crafted with a customised curve, making room for a new gas hob stove and oven beneath. The oven chosen is particularly interesting as its door slides inside instead of opening out to reduce unnecessary crowding.
The perfect final addition to this beautiful kitchen was the mirror splashback. Not only does it create a greater illusion of space but it also adds a unique touch of modernity.

Along with the exciting task of creating space, there were a few important upgrades that the renovation consultant and his team needed to complete.
Firstly, the apartment’s joinery needed designing to meet the standards for clearance from the building's automatic sprinkler system.
Secondly, the original wiring hadn't been touched. Meaning that, just like the apartment, the wiring was over a century old. For obvious safety reasons, all electricals needed re-wiring.
Later came the challenge of installing new plumbing in the bathroom. Not as simple as usual, this job required core drilling into the floor slab and removal of the bathroom ceiling from the apartment below.
Making a final splash, the new flooring needed to have an acoustic underlay to meet the apartment complex’s requirements for laying hard floors over a concrete slab. Fortunately, this important upgrade helped the homeowners to select a particular vinyl plank that has fantastic durability and is completely waterproof.

This apartment underwent a complete turn-of-the-century transformation that the homeowners were thrilled to achieve. Once filled with 100-year-old wiring and fixtures, the interior now gleams with modern brilliance.
From the warm-toned flooring and custom-built kitchen to the high-end silver tapware and minimalist bathroom, this city pad is definitely worth stopping by for longer than a weekend. 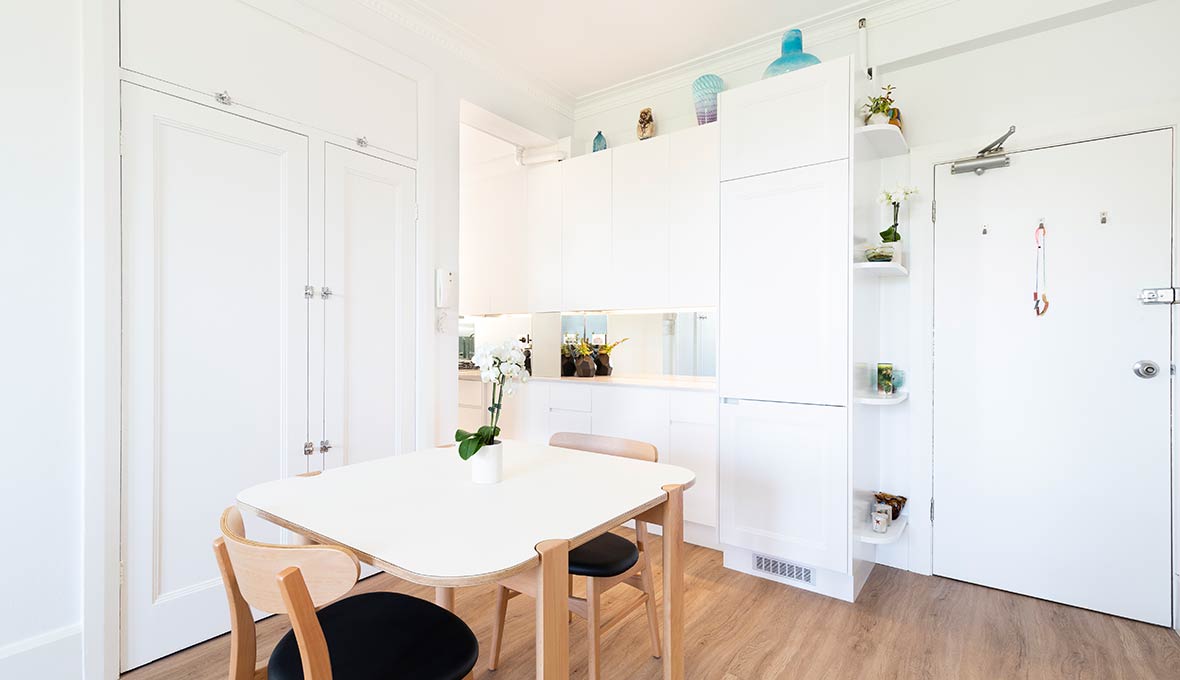 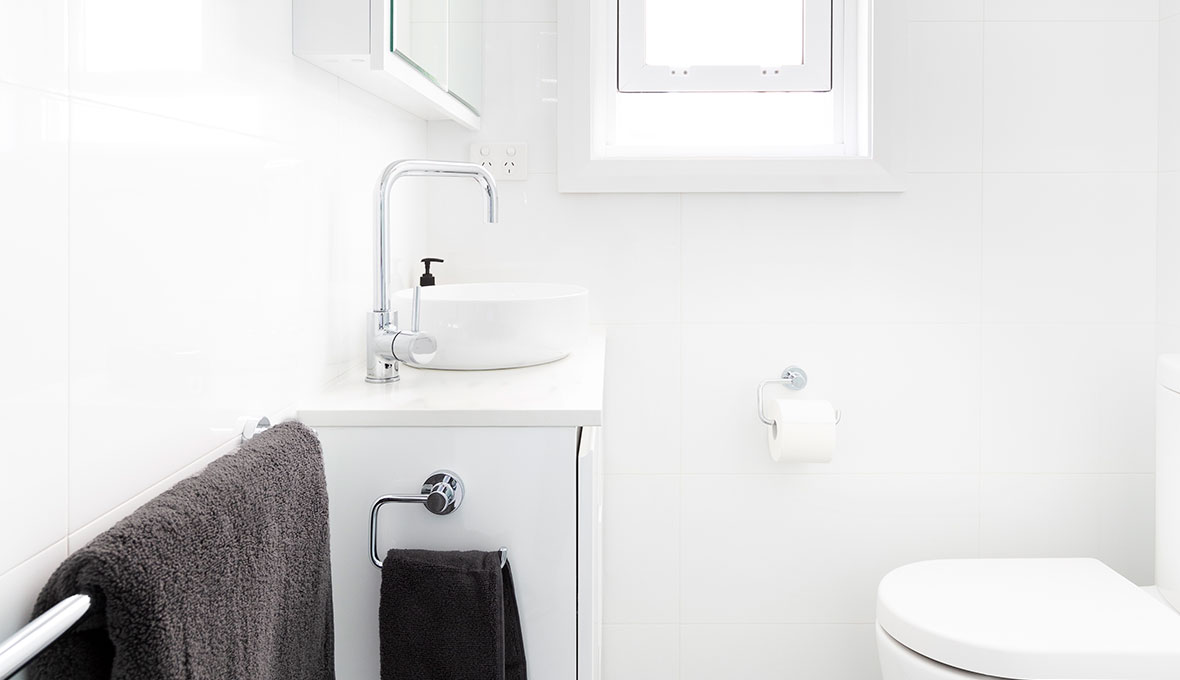 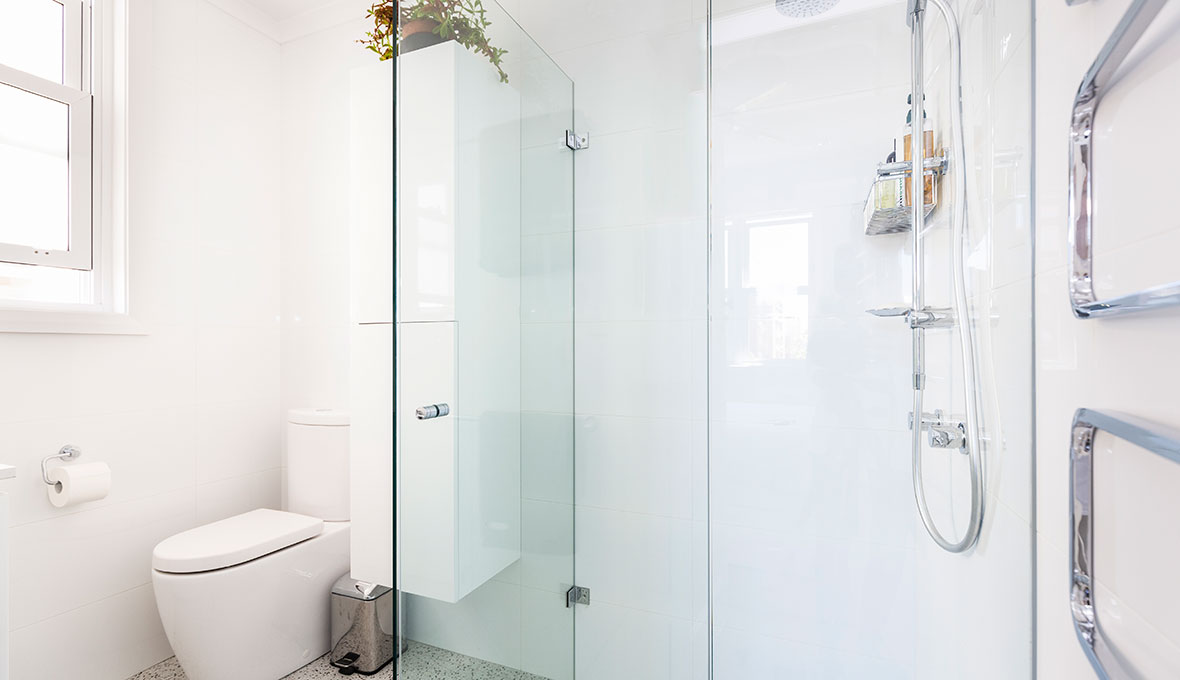 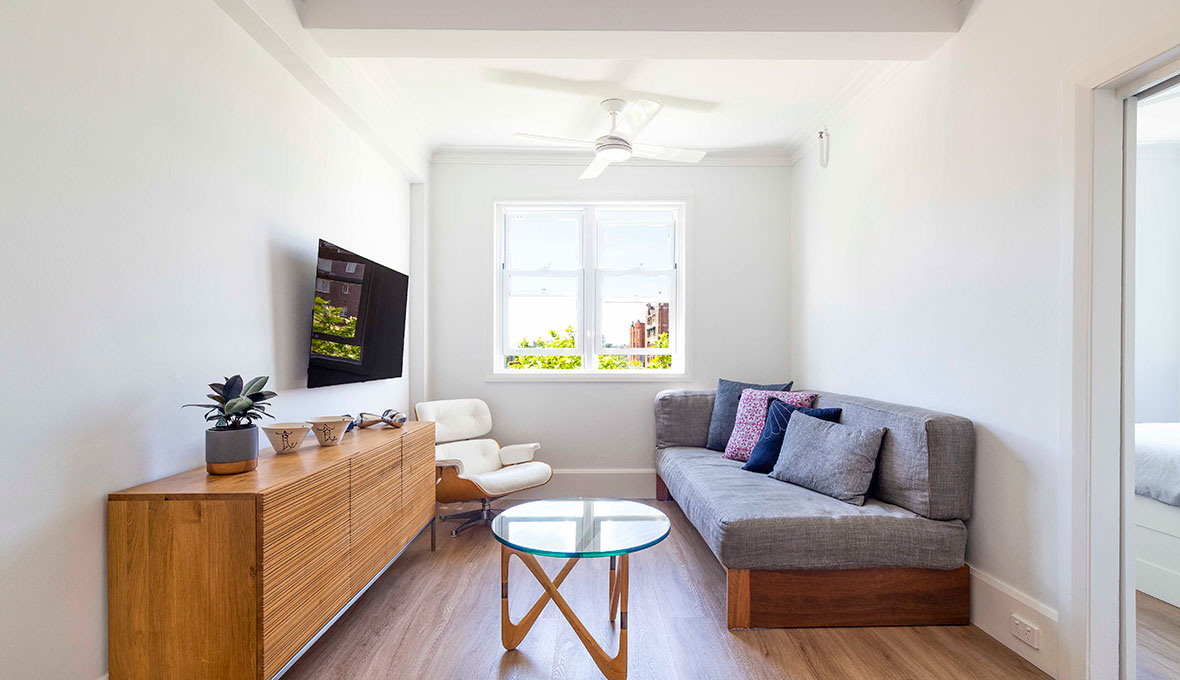