Lisa and Peter wanted to increase the functionality oftheir narrow, dated kitchen. Refresh made it happen.

Nestled in the suburb of Canada Bay in Sydney’s Inner West, is the home of Lisa Cowan and her partner Peter. Built in the 1970’s, their 2-bedroom apartment is one of 8 in the block and is typical of buildings of that era, with a rabbit warren of small rooms, each built for a single purpose. Lisa and Peter were keen to replace the dated narrow kitchen by removing the existing wall between the kitchen and living room and revamping the entire living area to create an open plan kitchen, dining and living room. The aim was to improve useability and functionality of their home and allow them to spend time together and still get on with their individual tasks.
With both of them working full time, Lisa and Peter knew they did not have the necessary time to project manage the job. While researching potential builders, a relative of Lisa suggested using Refresh Renovations. Being from New Zealand herself, Lisa was comfortable with the origins of the Refresh group and was keen to see what the Australian arm of the company could offer. Having met with Renovation Specialist, Hashim Nasser and Construction Manager, John Hanna of Refresh Renovations for the Initial Consultation, it was clear that this was the right team for the job.
There was definitely value in using a Project Manager. It made it a lot less stressful

Knocking down the wall was the first major hurdle in the project. “We had to get a structural assessment of the existing wall,” said Hashim. “The wall was carrying part of the roof and so we needed a beam to support it,” he added. A 4.5meter steel beam could have done the job but the size and weight presented the problems of how to get it into the second floor apartment safely and could the building handle the additional weight of the new beam,” he said.
After much research, drawing on industry contacts and experience and scanning the concrete slab to ensure that the footprint supporting the beam would take the weight, John was able to convince the Structural Engineer to replace the steel beam with 2 timber beams. These were lifted into the apartment via the balcony. Installing the beams into the ceiling cavity meant they were hidden from view and the ceiling was then plastered in preparation for the installation of new LED downlights throughout the open-plan space.

“When I met with Hashim and John, it was clear they had the necessary knowledge,” said Lisa. “I don’t think anyone else would have gone to the effort that John did in sourcing the beams. He had the knowledge and truly understood what needed to be done. There was definitely value in using a Project Manager. It made it a lot less stressful,” she added.
With the beams in place, the new Amorini kitchen cabinets and benchtop were installed. “The kitchen was designed for effective utilisation of the available wall space and to maximise cabinet and pantry storage,” said Hashim. A couple of small design changes from Lisa were easily accommodated such as the inclusion of deep drawers to store the pots, pans and plates. Roller drawers in the pantry provided easy access to those hard to reach items in the back of the drawer. 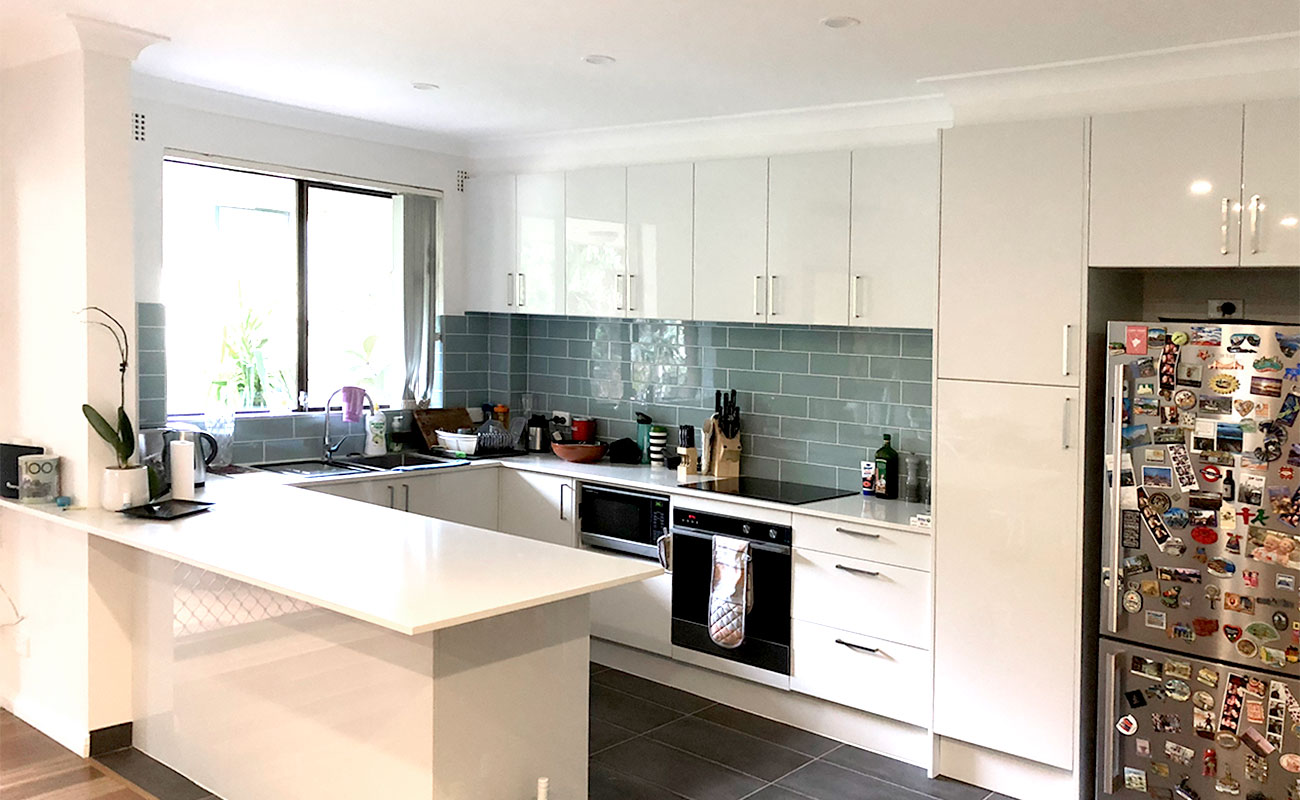 A crack in the bench-top did impose a delay in the timeline, but a new benchtop was supplied and installed within a reasonable timeframe and the final result was outstanding. A tiled, blue splashback provides interest and breaks up the all-white interior. “I’m very happy I chose a coloured splashback,” said Lisa. “I could have gone with white but I felt it needed a bit of colour,” she added. “My advice is to go with what you really like rather than what you think you should like,” she said.
The existing flooring was replaced with large, square, charcoal coloured tiles in the kitchen area. These provided a nice contrast with the newly installed spotted gum, timber flooring throughout the rest of the apartment. With a fresh coat of white paint and the installation of LED downlights throughout the living area, Lisa and Peters’ apartment home has been transformed into the modern, open-plan space they had hoped for. “Now I can watch TV while in the kitchen,” said Lisa. “With the open space, you feel like you are in a comfortable house rather than in an apartment.”

“We often tell the customer everything is possible, and in this project we had to walk the talk despite the physical and technical challenges. The space has transitioned in a very impressive way from how it was before, to how it is now,” explained Hashim. “It’s a case of not physically adding square footage but still gaining space and light by the simple act of removing a wall. It’s not only the space that was gained by taking down the wall but the unforseen psychological impact on the homeowners and how they now utilise their new living space,” he added.

You may also be interested in Auckland Bungalo Revamp 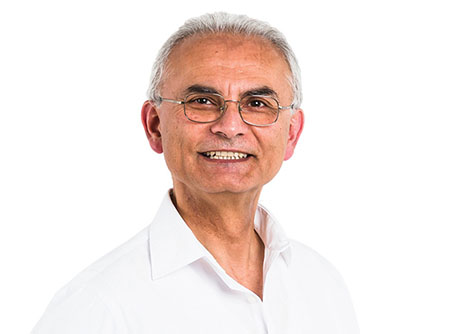